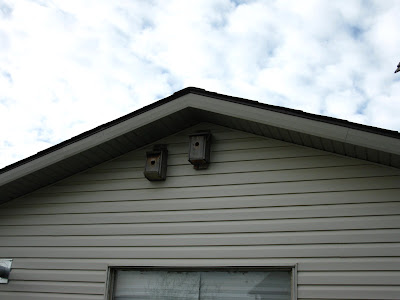 So...all I had to do was get the ladder out and climb up to the birdhouses and get my robin's nest that was on top, and while I am up there maybe clean out the house under it so that it is open for a new family to move into...sounds pretty simple right?
I grabbed the ladder...put it in place and then my garden gloves, two ice cream pails and a scraper. I headed up the ladder.
Now, this is where the story gets a little dicey. I scraped my nest (very carefully) from the top of the house on the right. Good...it's in my pail.
Next, open the house and remove all the rubbish inside so that someone can move in-just as any good landlord should! Easy! NO! I open the front...stick my hand in and pull all the left over mess from the previous tenants. Put it in the pail ....and then it happened...the pail in my hand started to BUZZ!!!! Have you ever seen a fireman slide down the ladder holding only the rails? I kinda did one of those. When the cloud of bumble bees came flying out of the pail, I almost fell off the ladder! I dropped all but the pail with my precious nest in it and slid down! (and not in a graceful way either...I was also saying some not so nice words on my scared little way!) 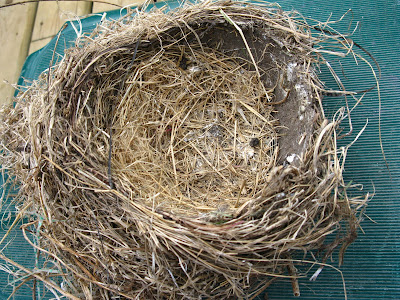 I had to stay inside with another breed of "Bumble Bee" and his big sister Pooh, as the real thing was outside angry and flying around very fast....so I had to wait for photos until this morning... which gave me a chance to change the pants I soiled.-(kidding) Here is the nest I waited so long and impatiently for!!! 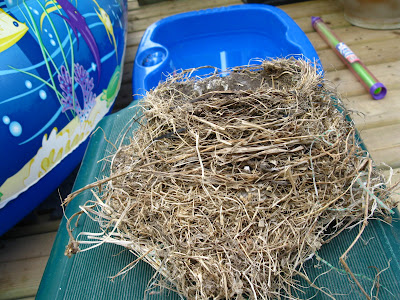 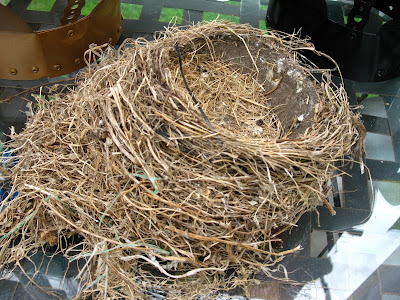 It leans on a bit of and angle...but I can work with anything...I waited forever for this!!! 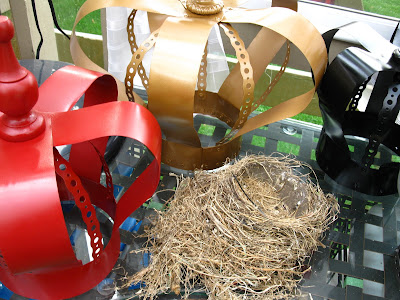 It absolutely blows me away that 4 baby robins lived in this tiny nest...
Where's the stuff I pulled out of the inside of the house???? 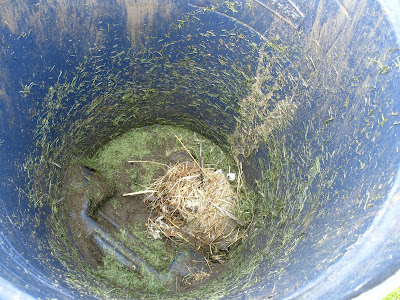 I can't just put it back inside the birdhouse...so I put it in a tall garbage can so that the bees can escape...there aren't too many of them left around...so I don't want them to die...It is not buzzing anymore...so I think they are gone. They aren't the huge type...they were very small...the size of a small jelly bean....there is not one clue of a bee hive in there...so I don't know what they are doing inside the birdhouse. 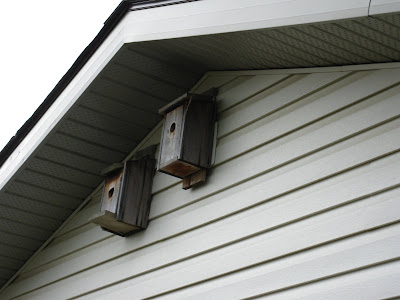 For now...the one on the right is a bee house...and the one on the left is full of sparrows. Good thing I grabbed the nest first or it would still have been up there!
Posted by Tootsie at 12:00 AM