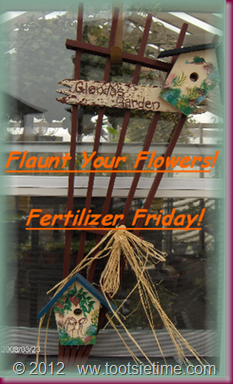 IS EVERYBOY READY!!!! IT IS FRIDAY!!! FRIDAY IS FLAUNTING DAY!!! I am so glad you stopped by!

Friday is a BIG day for us here at Tootsie Time…(ok, just me…there is no one else here…lol) It’s a big deal because it means it’s PARTY TIME!!!! Fertilizer Friday is the day of the week than an ELITE group of gardeners from all around the world get together, snap photos, link up and Flaunt Their Flowers!!!
If you are new to Tootsie Time and Fertilizer Friday, I just know you are asking yourself…”How do I join?”
Well…it’s easy really. Here’s all you need to know to become a part of this great group of gardeners, bloggers and friends:
If it is spring or summer where you live, you need to snap a few photos of what you have growing, blooming or just love to look at that is of the plant variety…if it is winter where you live, you may post past favorite photos…or indoor plants…whatever you like. The only criteria is that it is a plant or something growing! You do not need to use fertilizer to participate in this party, but if you do, this is the reminder to fertilize weekly! All I ask is that: Your post must include the logo above and/or a link to Tootsie Time, or the linky will be deleted.
So....I would like to invite each and every one of you to join in and share your photos...

Today I am going to tell you a little story…and share my newest addition to the Tootsie family!

As some of you already know, I took a little holiday this summer. My Cowboy and I decided to take a drive…across British Columbia. I live in Alberta Canada so…it was a nice long drive…with lots to see and take in. Every day we would get in the car and drive along from antique shop to antique shop all through our neighboring province. Each day we would drive and tour and sight see…and at the end of each day…in early evening, we would stop for the night.

One of the towns we stayed overnight in was Valemont British Columbia. We checked into our hotel, and decided to go downstairs to the restaurant in the hotel. This was a rather nice restaurant, and we were not the only ones in there having supper. It wasn’t busy, in there by a long shot, but we were not in there alone.

The best part of this restaurant was that it was decorated primarily with PLANTS!!! There were dozens of them all over the place. Now, because there were about four other tables of people sitting in there, I could not take a bunch of photos of the room, but I did take photos of one plant in particular that caught my eye. 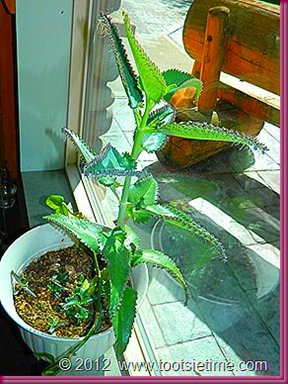 As luck would have it, we were seated on a sofa in the back of the room, and along the windows…and behind the sofa there was this very unusual plant. I have never seen a plant like this one before…and I was intrigued. I could identify each and every plant in that room EXCEPT this one…and I NEEDED to have one of them….

…now I need to mention that this restaurant was rather large…and there was only one waitress working at this time…AND…she was …well…ok… lets be honest…she was not all that energetic. The service was very slow…we were actually starting to think she didn’t even know we were there when she finally came over to our table.

….so in fine Tootsie form…I started to snap a few photos…and try to zoom in so that I could get a little bit better look at this plant…It didn’t take long for me to need to see this up CLOSE. So….I went behind the sofa.

YES …yes I did…I crawled over the arm of the sofa…and casually crouched down behind it. YES….yes my Cowboy was indeed a little bit amused at this…but he was not surprised…not at all. He actually thought it rather funny. 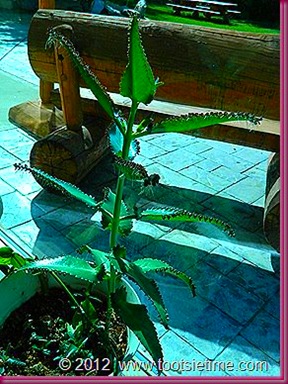 This is the plant I was staring at with delight! It is called….are you ready???? It is called….Kalanchoe Daigremontiana . The common name for it is Mother- of Millions.

There were about 4 0r 5 pots of this species all lined up behind that sofa!!! 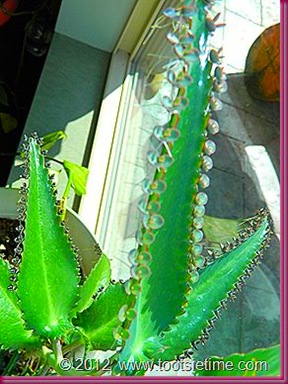 They were all right along the window to the patio outside…and there was no one really looking…so I wasn’t really drawing any attention to myself… hmmmmm….(evil grins) 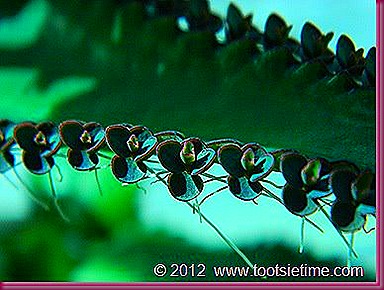 Is this not the neatest plant??? Are those baby plants on the leaf???? Oh MY!!! Can you blame me for being thrilled at the sight of this unusual plant??????? REALLY…CAN ANYONE??? 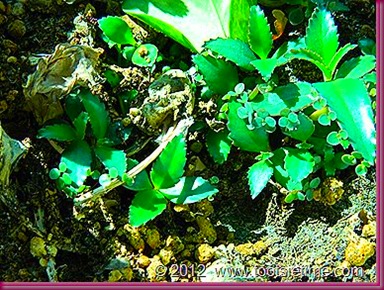 On the top of the soil in the pots there was a bunch of baby plants all popping up practically everywhere!!! 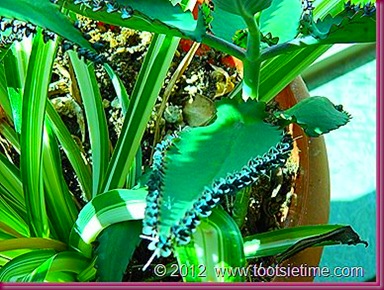 I could not get over how glorious this plant looks with all the little rosettes of baby plants all lined up between the thorns!!! They look like ruffles!!! (this one was sharing space in the pot with a spider plant )

Now I mentioned that there were 4 or 5 pots of this special little plant all lined up along the window…and YES I did consider slipping one under my t-shirt and dashing out the door…until I saw that some of those “ruffles” on the leaves appeared to in fact be SEED!!!!

Squealing in delight, I asked my Cowboy, (who was doing a wonderful job as look out guy…) to pass me a napkin. He just grinned, shook his head and passed it over…I think he might have been thinking I was going to try to wrap up one of the already growing plants and sneak it out…but instead I filled my napkin with as many seeds as I could in a hurry…and quietly slipped back into my seat on the sofa. I think he was relieved when I finally came back to my perch on the sofa…he is a very shy sort of cowboy…does not like to draw a lot of attention to himself most of the time…

I was so excited…I could barely contain myself…I was also anxious to get some of these seeds into some soil! That would have to wait because we still had almost a full week until we were to be returning home.

Once we were home, I posted a photo of this plant online and found out what it was called…(thanks guys) I then got a little bit busy, put the seeds down, and forgot all about them! A few days ago I was in the greenhouse, and came across them…and of course I felt that same surge of excitement as I gingerly placed them into some potting soil and set them on the counter.

The very next day I checked the pot, and to my delight… 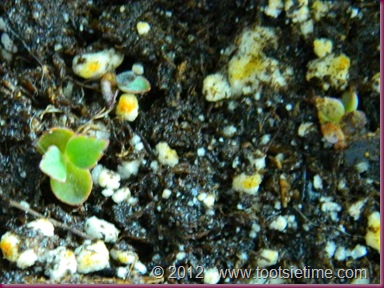 I am officially the proud new owner of several MOTHER OF MILLIONS plants! 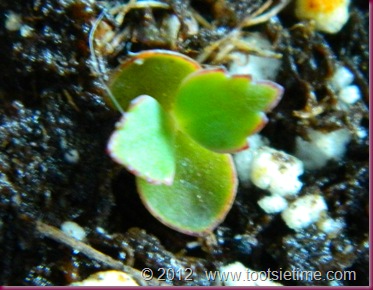 Kalanchoe Daigremontiana/ Mother-of-millions /Alligator plant is a succulent plant native to Madagascar and Africa,where it is considered a horrible weed. (I can relate to this…people are actually paying good money for chickweed and dandelion seeds online!!! I hate it…it is invasive and horrible!) However, in other places…such as Alberta… it is a much sought after, hard to find, yet very easy to care for house plant!!! (and I have some!!!! yay!!!)

In my area (Alberta Canada) The Mother-of-millions plant will only survive as a houseplant, as it would be killed by frost, and cold temperatures. In warmer climates Mother-of-millions is a very invasive species, as they multiply rapidly. 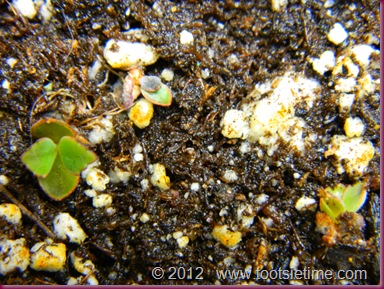 After only one day in the soil I had one! Two days later I have FIVE! There are only three in these photos…so you will have to take my word for it…ha ha! I imagine by the end of the weekend I will have several more!

If that Cowboy plays his cards right …I MIGHT even share and give him one for his house…MAYBE…if he’s nice. ha ha! Oh who am I kidding…he’s almost as excited as me about the seeds sprouting…after all…he was the lookout guy while I was hiding behind the sofa…picking seeds while we waited for our meal…I suppose I can give him ONE. I wonder…if someone would have been coming over to us, would he have warned me??? Or would he have pretended he didn’t know who I even was! Lucky for us we didn’t need to find out. I guess there is something to say about a waitress that wasn’t really all that energetic…ha ha! It definitely worked out well for me!

ALL PARTS of these plants are highly toxic to humans and animals so it is important to make sure that you keep this plant out of reach of kids and curious pets. Be cautious with this plant and watch the area around it’s pot…as some of the rosettes/ babies may drop off of the plant and land on the floor.

Okay kids…that is all for me for this week…now it is your turn.,,,

What are you waiting for??? Get flaunting!

I wish all of you hugs and smiles, and safe and happy weekend plans! Thank you all so much for dropping in today, and to those that faithfully link in to this party…and who are patient while waiting for me to finally visit you…THANK YOU!

*)*)*) A fool knows everything, except their own ignorance…just sayin’