Well...it is Official!!! School in our city has let the kids out for the summer!!! The last day of classes was Friday...but summer holidays don't start until you find out what the report card said!!! And today was that day! First thing this morning, we were up and running our little heels off to get to those report cards! Everyone was happy to hear that they passed and are not grounded!! lol
Morning had just barely passed us when Lilsista phoned to say she was about 3 houses down, and letting a herd out of her vehicle! Yippie!!! LOTS of children to play! 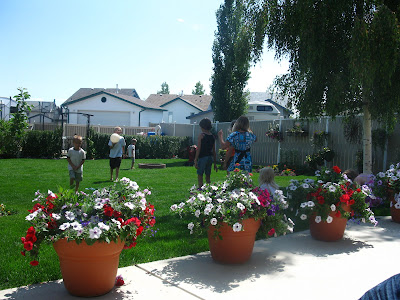 In total there were 11 kids in my back yard today! Now...you would think that this would be a nightmare and super duper loud wouldn't ya??? well today (oddly) you would be wrong! Lilsista brought her 5 + 1 friend, I have my 3...and the 2 from next door made the total weed- oops...did I say that? I meant head count 11!!! 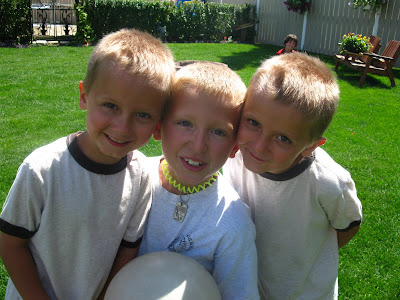 can you spot the perp? yep! they are ALL guilty of something!!! Those are the three grandsons that Grampie always dreamed of....they are even silly like him...(some of the things those twins do....they are hilarious) The one in the middle is mine (and he too is rotten)...they are trying to see if they are triplets! 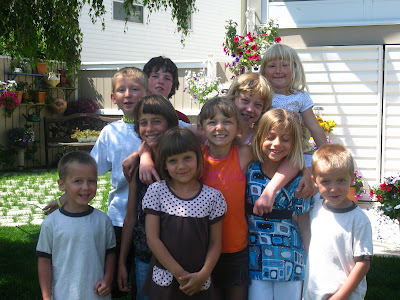 There's a 5 year old missing from this photo....but he doesn't belong to us...so it is okay...lol
This is the majority of the gang....see? they are all smiling...no arguments no nothing! They are all getting so big! We had a very good time. What did we do you ask??? 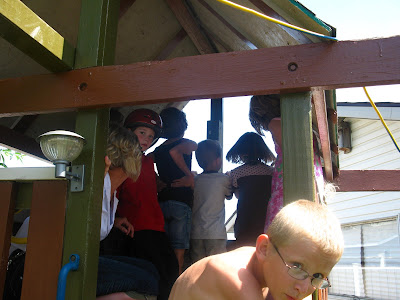 Well...we tested the strength of the tree house....All 12 of them (I was on the ground taking the shots) were in the tree house (Lilsista included) One of the girls said she saw momma Robin feeding a BABY BIRD!!!! So we HAD to check....but didn't see much 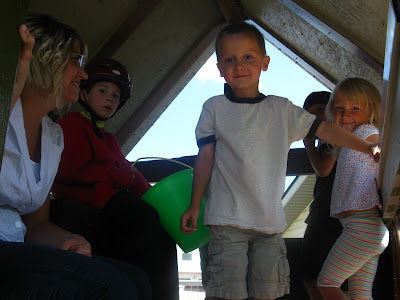 That tree house was a little unstable with all of us in it...especially me and you know who...
I also don't think Momma Robin was impressed....it looks like she is mouthing some choice words at us...don't believe me? see for yourself! 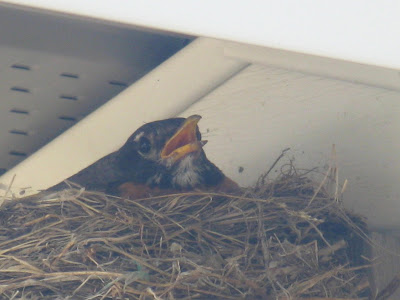 Looks like she is saying very bad words under her breath...so we left the tree house to give her some space...
I had a bunch of tattoos in a jar...brought them out...and everyone got at least three tattoos...some had 4..but who's counting!
Then the clouds rolled in, it was getting windy...started to rain...and ....it was time for supper to be cooked...so Lilsista headed for the hi-way...and I cooked supper.
Maybe ...we will have to grace her house with some slurpees tomorrow or the next day...but we won't make it a for sure...gotta keep that little brat off guard...
Thanks for the visit guys!
Posted by Tootsie at 12:01 AM

oh tootsie, you and your sister remind me of myself and my sisters. My one sister lives over a block and we would get together all the time when our kids were younger and my yard always looked like yours, between our own children, nieces, nephews and also the gathering home for all the neighbour kids. Oh lordy, the days it would rain, nothing to have 15 to 20 kids in the recroom. I actually didnt mind as i always knew where my kids were. After the summer, i was ready for a much needed rest. Congrats on your children passing.
hugs
janet

Okay...Pleezzzzee...anyone know a good surgeon?...Did you see my side profile in the treehouse? What the....? I guess I wasn't adopted after all...I have my parent's nose fur sure. Hailey is sure it is from all the lying I did when I was a kid! I told her that couldn't be possible or else my nose would be dragging on the floor :0) ! Ha! I think I'm painting the fence tomorrow if it's nice out...I will probably need a slurpee...so i don't get too "sweaty" Hee,hee... Bye!

Oh to be a kid again just getting out of school for the summer. I used to love that feeling. -Jackie

What a great day! It is great the kids all get along so well(-: A slurpee would have been welcome here today! Its hottttt(-: Have a great day tomorrow!!!

What a perfectly gorgeous day Tootsie!
Your blog looks so pretty too! ;)

How great is that when all the kids can get together and have so much fun! Truely a great summer day, Tootsie!!! That treehouse is so awesome!

Looks like a fun day! They are all just adorable.

Okay Missy, so you garden, clean like a wild woman, paint, restore furniture, go junkin' places some of us would never think to go and now......You are the Kool-Aid Mom!! Kudos to you!!! Looks like fun was had by all.

Nothing like sisters and kids.
Love the shots of the kids in the tree house. And yes, that bird was screaming at you. LOL

I linked to you with a question.

I remember when I had no nerves also ;-) Your a trooper. They must have a long school year or maybe they do not start in August like here.It makes one remember how you use to live for school to be out and warm summer days to play.

I think the Robin was just joining in all the fun lol, my sisters and I would all get together over the summer with the kids and it was a riot lol, happy summer days, Kathy.

ps. you sure got some lovely things yesterday, those chairs are beautiful.

Holy kids! I would have been pulling my hair out with all those rugrats in the yard! But, it looks like you guys had fun! And hey, at least they didn't stay for dinner, right?

GM My other daughter...girl you look like the "Kool aide" Mom...WOW!! thats alot of kiddo in one spot ha ha!! Your yard is looking just beautiful girl all the flowers pots are doing great...now tell Lilsis to get out of that play hose thats for the kids..Girl this so reminded me of when my girls were younger and evey kid in the world thought my house was there house...I think I told you my SIL was my daughter #1 best friend and she lived at our house...one day even Wally asked me if we adopted her ha ha!! And now she been married to my Brother for 30 years WOW!! any hoo have a great day sweet girl...Hugs and smiles Gl♥ria

What a wondeful way to start your summer! Love that treehouse too.

What a FUN day!!! Wow I can't believe your kids are just now getting out! The kids here have been out a good month. But surely they will go back much earlier than yours!

Lisista you DO NOT need a surgeon crazy! You look great!

Hi Tootsie
You had a lot of little kiddies in your yard and it looks like you all had a lot of fun too!
Cute mother robin too...
Happy Canada Day....I hope you are having a lovely day today...
Judi

Looks like a fabulous day!! Cute kids having fun!

Hi auntie Glenda
just wishing you a Happy Canada Day:)
How is your day today?I saw our pictures from yesterday I thought that they are very pretty.

Now that's summer the way I remember it when my kids were still in school! I was never happier than when I had half the neighborhood in my yard!
We never knew how many we would have at dinner or overnight and I miss that so much. The house was always so alive.
Good looking bunch of kiddos y'all got there!
Debbie

Looks like the tree house held up great! I can't believe they are just getting out! I forgot how late it was in Canada!! Hope all is well and they enjoy their summer! Hugs French xoxo

Tootsie, these are the best pictures & the kids all look so happy. You must have a very sturdy treehouse with all of you in it! Your yard is gorgeous! Poor Mama Robin... ☺ Diane

whew! you are a brave soul to care for all those kids at one time.....yikes. They sure are cute!

When I was young we had a hill side for the back,so we got to play in the woods. Now it would be call bad. Then we just had fun exploring the woods, walking and catching crawdads in the creek. hehe I miss those days!Kathy

reminds me of my younger years with the neighborhood kids in our pool almost everyday! I'm too friggin old for that comotion, just 1 at a time for this old lady! LOL!! Cute kids though!! Happy summertime to them all! xo

Tootsie, thanks so much for the visit. Hope this finds well your way... Happy Fourth..
hugs ~lynne~

thanks for stopping over tootsie. We go for rides down in what is refered to around here as the county, they have some little family owned shops, and normally have some neat little things. Some of the stores are expensive but i bought the pear for around 6 dollars which i didnt think was bad in stores such as these. Thank you for stopping by and for your sweet words.
hugs
janet

What a great summer the cousins share! It's special that you guys live so close and get along so well.

Oh, how cute, Tootsie! Love the shots of all the kiddies having fun! Now that's a set of triplets if I've ever seen any! LOL Precious little boys! This kind of reminds me of when I was a child. All the kids came over to my house - I had the swing set and a lot to play soft ball in! :)
Hope you had a great Canada Day!
be a sweetie,
Shelia :)

thanks to all who joined in this week...I know that with the holiday it was a challenge!
have a great weekend!