A Day in the Country

On Monday morning…bright and early…the kids and I hauled ourselves out of bed and headed the 225 km back to the farm to ride said quads. 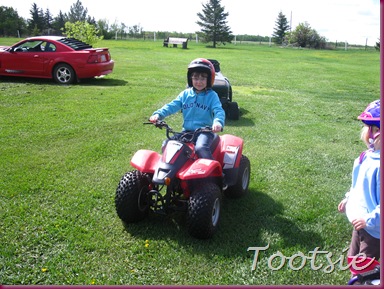 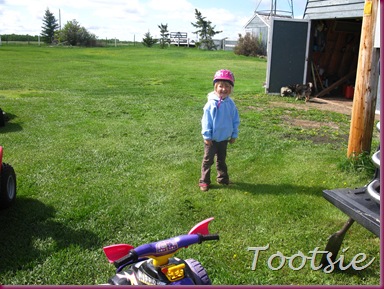 Busy brought her battery operated quad…but it wouldn’t hold a charge…so she was a little sad…especially since she wore her helmet all the 225km drive!!! 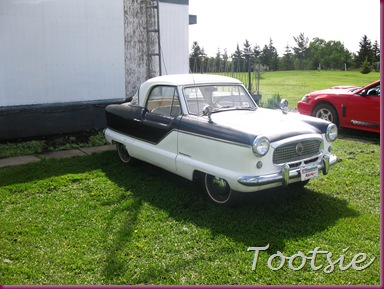 Before all the quadding began…we said goodbye to an old friend.  20 years ago my Dad purchased this little tiny car.  It is called a Metropolitan.  It is so little that it fits inside the box of a truck..ha-ha…it’s the type Donald Duck drives…Isn’t it cute? 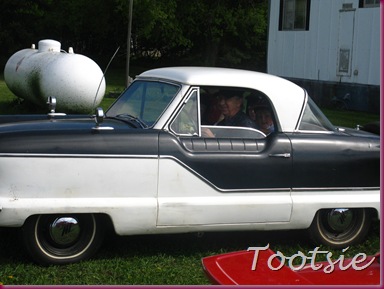 My Dad fired her up…and took the kids for one last ride before the man who bought it from him would arrive to pick it up.  This is a one time deal for the kids I’m sure…there aren’t many of these cars left around. 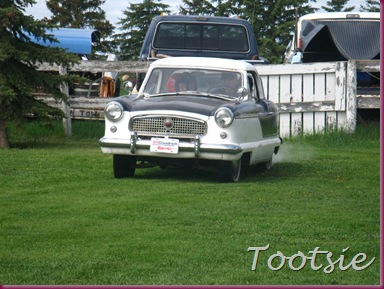 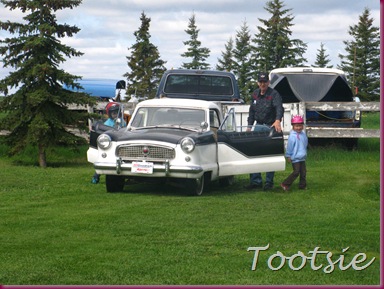 Goodbye little Met…I wish I was driving you!!!!  Gloria?  did you see?  Keep an eye open for this car when you and Len go to the car shows…that’s where they are supposed to be taking it!!! 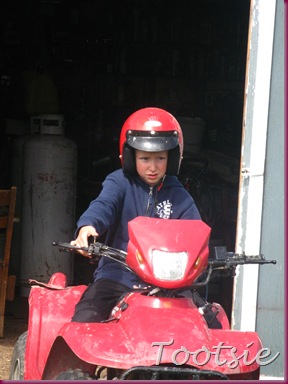 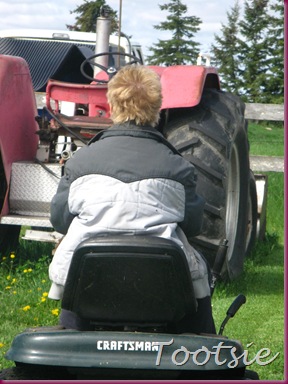 She just finished a little mowing when we showed up…

What was she mowing?  Oh I am so glad you asked… 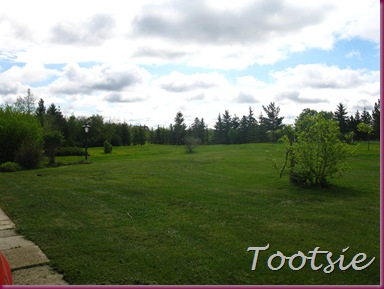 The following photos are around the yard out at the acreage/farm site I grew up on.  They don’t live out here full time anymore, (at least not till they retire) so they don’t have a lot of the primping done and there are no annuals planted here…but the perennials and natural landscape are very pretty.. 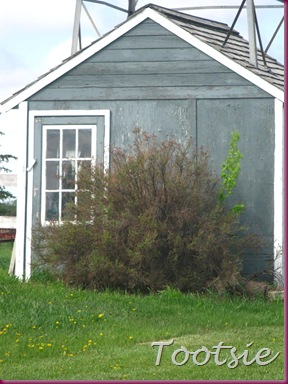 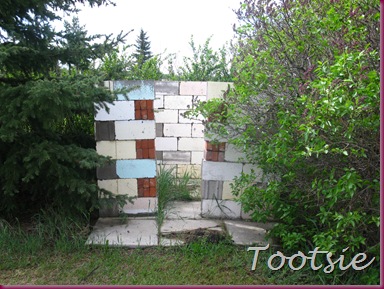 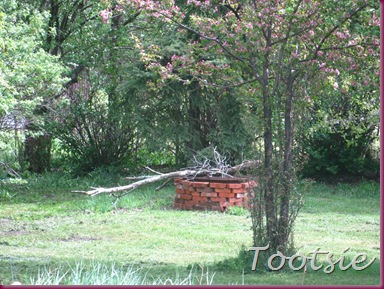 The funny part is that they missed the one Grampie left them as bait!  ha-ha.  This dead branch is still sitting there…It was almost right outside their door!!! 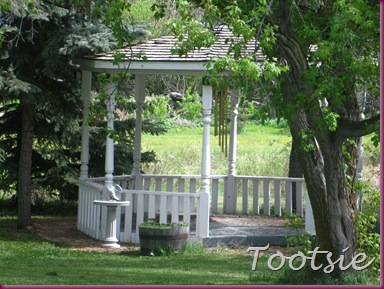 I am painting up some furniture to put on the gazebo out there…between the wind chimes and the birds….it is just such a nice sound…the birds are soooo loud out there,  just singing and singing. 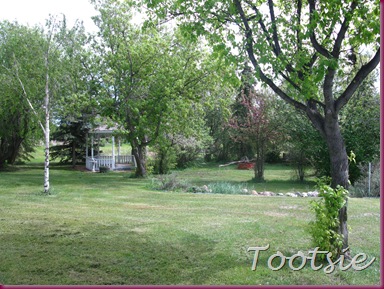 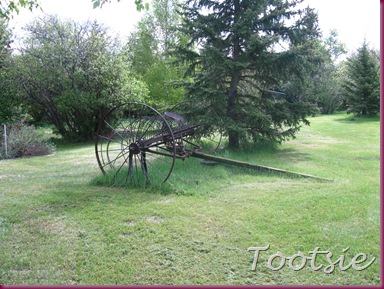 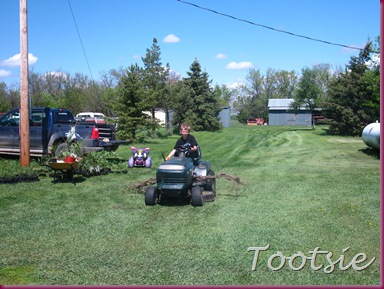 Oh!  Here comes the “Duch”  (pronounced it sounds like pooch)

He dumped his quad to ride the lawn mower…it has a stick shift!  ha-ha…he is hauling a branch for the roof!  It was very serious business! 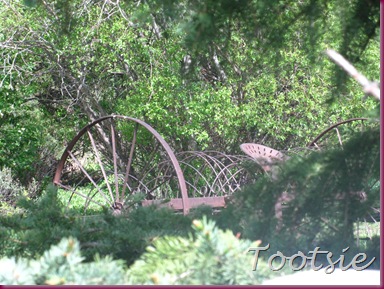 It’s just so peaceful out there…even with the quads humming in the background!  There is not one siren or horn honking.  Just birds and sunshine.

The photos today are just in the immediate front yard…this place is huge…and beautiful! 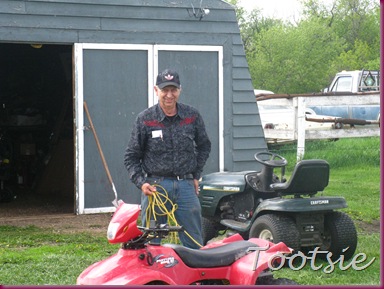 Yeppers!!!  That’s my Dad!!!  WHAT is he doing?  Why is it that when we see him grinning like that we worry? 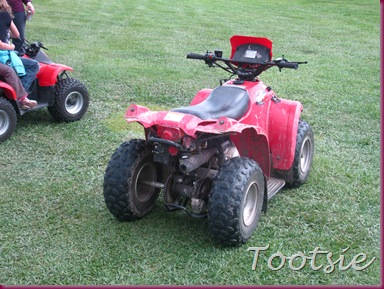 There’s a commotion over here.   WHERE is “Duchy”?  What’s that?  Is that a lecture I hear? 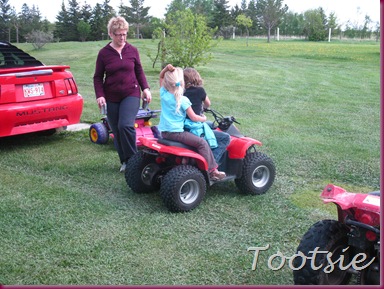 It sure is…”Where are your helmets?  you get them on or Grammie won’t let you ride that quad in her yard!!!”  “Get going and find them Now!!!” 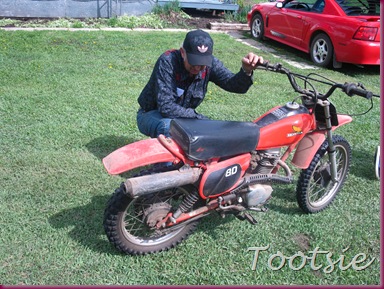 Oh Boy…I think I know why Grampie was grinning like that!  He’s got the dirt bike out! 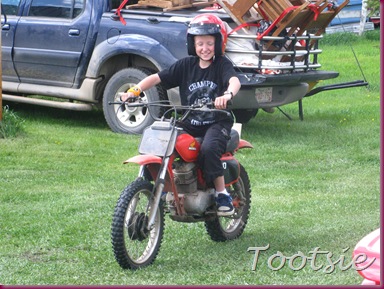 Too late…!  “Duchy” found Grampie…and the fun was on!  (for them anyways)

The gang decided to leave the quads at the farm…they can’t ride them around home…not like they did here…since they are the kid’s quads…the kids have the say.  I can see a lot of visits this summer!!! 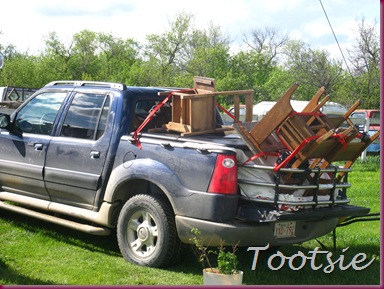 And away we went…like the Beverly Hillbillies… The inside of the box of my truck is loaded to the gills with plants, so I won’t share that till later…but those desks on top?  yes…they are treasures I junked from Grampie’s garage (the superstore)…I can’t wait to get them home…I already have one there that he gave me a few months ago…but hey…a girl might need to start her own classroom right???  ha-ha

And that is the day in the Country we had yesterday.  I hope you enjoyed your visit!  Thanks for having us Grammie and Grampie!!!

See you all for Fertilizer Friday!!!

Oh Honey what a fun time you and the kids had...and I'll look for Pops car at the shows ha ha!! oh girl I loved all this property that your folks have...oh what fun I could have there and look at that poor truck loaded down with all those treasurers girl I bet you'll be doing something fun with all of them...Hey I just got your email and wanted you to know Len will be gone today to Reno...call me later and well catch up...love ya girl...Hugs and smiles Gl♥ria

Looks like loads of fun to be had there. I like the looks of the truck leaving - tehee hee. i want be here on Friday - catch ya next week Toots.

Tons of fun! Good trip and good visit. I like the Met. Too bad your Dad didn't give it to you. You'd be so cute driving it around.

Tootsie, now that is what I call real fun!! What a wonderful place for kids, they are building awesome memories!! Love the photograph of your daddy grinning!

I enlarged the picture and I think your desks look like one I have! Oh taht car, there are no words. I truly love it! Right now I'm lusting after a Smart Car so you know how much I like to drive little cars. I bet it broke his heart to sell it. Too bad things have to change. This looked like a fabulous day for everyone and so much room to ride around! I love that you call them Grammy and Grampy too. That's what we call ourselves but we spell it different as you can see! Hope the sun is shining on you today!

Love your Dads car. I thought it looked like the little Nash Ramblers and I guess it is. Ya just never see these anymore and they were sooooo cute.
What a great place for you and the family to spend time - I'll bet the kids just love to go there. My parents had a place similar and we loved going for the weekend. Rides in the tractor scoop and driving it and the lawnmower, feeding the baby calves - just so many wonderful things to do out in the country and my daughter loved it.
Now we're the grandparents and the kids come over. We're out in the country - don't have as much land - but enough they can run free and do more than in town. Hope they enjoy it as much as we did going to Grandma and Grandpas place.
Hey - I'm so glad you liked my BBQ. I think I'm going to change it back to annuals again - I miss how beautiful and stuffed full it was!!!

How lucky are you? What a great way to spend a day. Plus you scored some furniture!

Window On The Prairie said...

I've heard of the Metropolitan, but never seen one. How cute. I wonder I could drive our cattle with it - just kidding.
Suzanne

How fun is all of this! I loved going to the country with you. Sounds like you had a ball! The kids are so cute.

What a big time was had by all. Adorable little car, I bet the sell of it was bittersweet for your Dad.

What a busy but fun day you and your family had. The little car is too cute, and the gazebo looks like a perfect place to relax.

ok-your blog is beautiful! When I clicked on your page-your gardens took my breath away!! Incredible gardening skills that you have. I wish that I had even a 1/4! Gorgeous!! I have a question for you-I figured that I would love for my yard to look half as fabulous as yours-I was wondering if you would answer a few questions for me! I will shoot them to you in an email. Thank you for all of your hard work and posting it for all to see! You made my day a little brighter!! Please, stop by sometime and visit!
Happy Tuesday!!

What a great time you had down on the farm. That Metropolitan car is a treasure. They are a real collectible.

What a grand trip for the kids, especially!!! I know they loved it! The motoercycle was really great for your boy! LOL!
Fun all the way around. I know your parents loved having ya'll there as well!!!

Tootsie, that is an awesome farm. We had one of those antique thingie
thing that rakes or plows behind a tractor, it was so neat looking.
Glad the kids had a fun trip.
Georgie is so adorible you could
just hug her..The size of the car to the truck is incredible,so tiny..

What a wonderful place your parents have. Looks like the kiddos had a fun time. Well... it looks like your are going to have a funnier time now. I see new projects and flower beds in the making LOL!

What a wonderful place for you and the kids to be able to visit. How fun for them. They'll remember these times forever. Looks like your dad is quite a character, and he must be your son's hero. Thanks for sharing.