A Day In The Garden…Making It MINE.

Happy Monday everyone!!! I hope you all had a wonderful weekend…and a great Father’s day. I did.

Today I will be linking this post in to Nan over at Mom's the word...she has a great meme called making your home sing monday! click the logo to visit the others who are singing right along with her.

Now…those of you who know me as a friend and fellow blogger, know I have not been having the very best time of things the last couple of years…almost 4 to be exact…and that things are still a bit bumpy. I have been stressed to the max, and busy as I can be. (some busy is by choice…some not so much) Thank you from the bottom of my heart to those of you who have helped hold me up through the most devastating time…and for holding me and the kids in your hearts and prayers as we heal.

I keep busy as a way to cope with the stresses in my world. My favorite way to keep my sanity is to play in my gardens. Now, there were times over the past few years, that things were really bad and I did not care about a lot I did just the basics to keep things alive, but did not have it in me to get anything new going. I am beginning a new chapter in my life…healing and getting stronger every day…and I have decided that this year I would do all of those things in my house or garden that I either was not allowed to do…or never got around to before. This ... is two of those things. 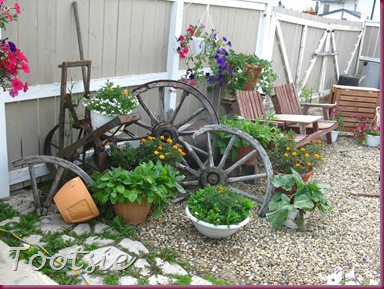 I know you all remember the post I did on the day of junkin’ I did last summer. I had a wonderful time…and I got all the wagon wheels and the iron piece as well as a few tree stumps that day…remember the story about how all I had for tools with me was the claw foot hammer??? How I hacked that large wheel away from it’s axel with the claw? Well…this area looks okay for now…but I thought it could look much much better with a little effort…so…I put in some effort.

I got in my truck…and went for a little drive…I drove around until I found a pile of larger rocks… loaded up until my truck was almost over loaded with weight. Then as fast as a girl with too much weight in the box of her little truck could go…I headed for home.

I worked my bum off for over an hour to remove 6 inches of gravel from the area under the “olden pile” . I have always wanted a rock garden in my yard…it just never happened. Until now… 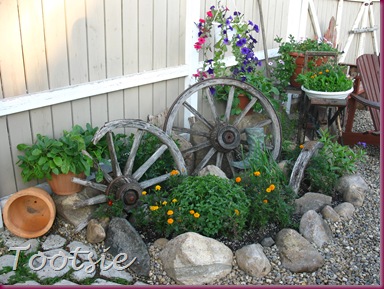 TA-DA!!! Tootsie has her rock garden…in the gravel area of her yard! 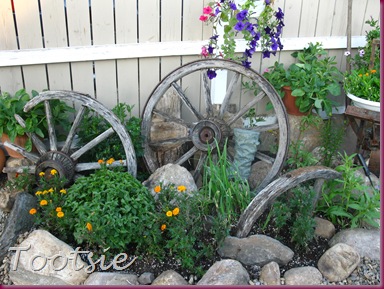 I planted an Elder tree in there…some monkshood, some iris, and a few other things from the back alley bed…(trying to clean up that bed out back) I robbed two pots of marigolds to fill in…and that’s my new look for my “olden junk”. 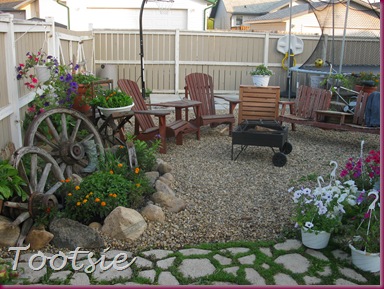 In total I put about 9 inches of soil into the bed…and it sure did clean up the area. I recently moved the fire pit area into the gravel part…and thought it would be a great place to build a new feature. The kid’s trampoline is back here…and for 6 years I have hated the gravel area…it was grungy and dirty looking…a catch all for weeds, unwanted crap and just plain ugly.

It is the first area you see when you walk into the back gate…so why not make it look nice? In the past it was used as winter storage for boat, trailers, trucks…whatever…but that is the past…the future is now…and it’s MINE. I did what I wanted to do with it. 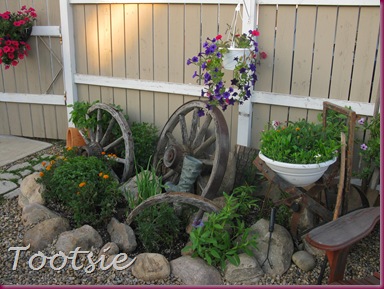 I think it looks much more inviting now. 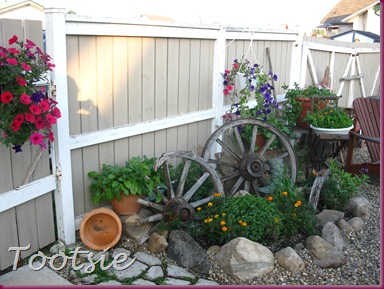 I am happy with the result…it was worth the effort. I am considering a short strand of lights to accent it in the evening…what do you think?

After I finished that, it was almost a million degrees outside…and anyone else would have stopped for the day, had a lemonade and sat and admired the new area…but not me!!! I headed out to the alley to clean up the disgusting mess of weeds and trash that had accumulated over the winter.

I have always wanted to clean the alley area up and make it look nice. No one in the area keeps their weeds down but me...and it is making me crazy. In my other house, I had a whole bed set up out in the alley behind the fence… my neighbors loved it…and it was one of my favorite beds…so why not make one here (but on a much smaller scale)?

(I don’t have a before photo…you will just have to take my word that it was a disgrace to my Tootsieness.) 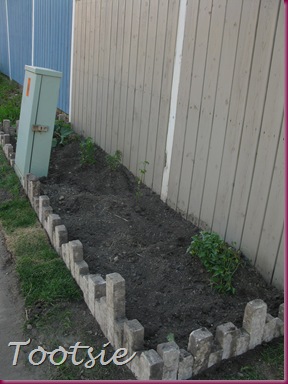 The guy across the alley had pulled out a brick type path from his yard and piled the bricks out behind his property…slated for a dump trip. We were exchanging the usual small talk and chit chat one morning and the pile of bricks came up … they became mine! 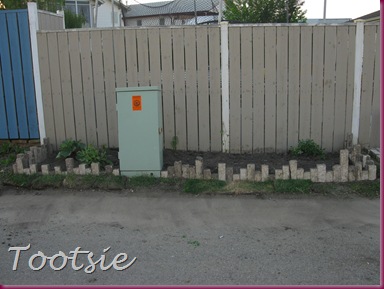 So I put them in the back alley bed to contain the soil. I have already borrowed a lot of the plants that I had in that area for the front yard, that new rock garden and a couple of other places, so it was a mess of weeds…and needed some attention. 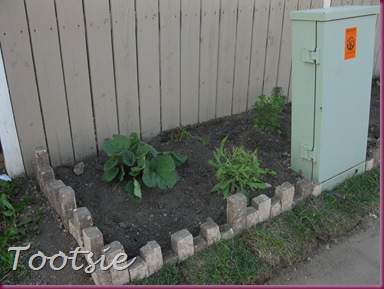 I dug them into the soil, packed it firm…and pulled a LOT of weeds…cleaned up the 1/2 dead grass and this is where is is at today! 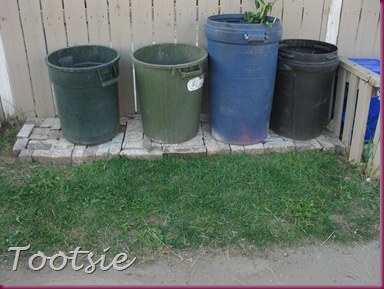 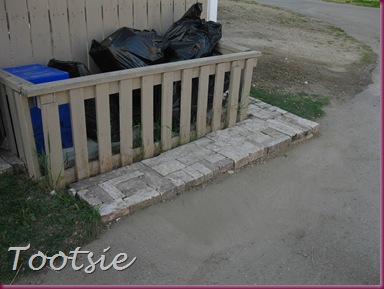 I made a little walk way thing for the front of the garbage bag corral.

In all of the process…I managed to tick off a huge ant colony that had moved into the flower bed. I didn’t realize that it was even there until my upper body was literally covered in ants! Ya…I did a dance…and a lot of screaming…and then made sure I was alone in the alley. The only one who managed to see, hear and laugh out loud at me…was Justin…the young man who lets me boss him around in his gardens…Ha-ha. He thought it was hilarious! What he doesn’t know…is that the joke is on him…I planted a few more of those plants in his yard…he didn’t even notice…hee hee…and next week…time and my sore arm permitting…he might just be getting that hedge!!!! ( finally agreed to having a hedge if I insist on it- I love that he lets me be the boss!) {8~) 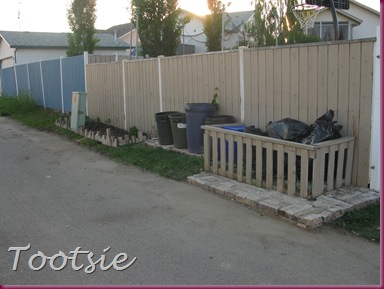 Ta-da! the whole project all finished up.

The cost for both of these projects….ZERO Dollars. Just a lot of sweat…and a few sore muscles.

Oh…one more thing…I have already had several people stop-look and compliment me on having the nicest alley bed in the area! That made it all worthwhile right then and there!

Thanks for stopping in…see you in a couple days with more from the list of things I plan to do….{8~)