A GLOSSARY OF TERMS (part 1 of You Asked for it)

When I first started gardening, I was sometimes confused about the terms used in gardening books and garden centers. I decided to make us a glossary of the terms I heard most often. I tried to use photos to show a visual of each term whenever it was appropriate/possible.

DEAD HEADING
Dead Heading is the removal of spent or faded blooms. Now, this can mean different things for different plants. The general description would be the removing of finished flowers to maintain a neat appearance. This action will also prolong the blooming period of your flowers. For plants such as Marigold, you simply pop off the spent flower and move on. For Geraniums, you will want to remove the entire flower ball and the stem that they are attached to. 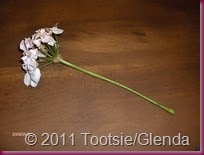 This long skinny stem is not a branch on the plant and is safe to remove with out hurting your plant.

A Dahlia will also need to have this small section of stem removed. The photo is to depict a geranium bloom that has been dead headed.

SCARIFYING THE ROOT BALL
This is when you mess up the roots of the plant before you plant it in your soil. By doing this you will separate some of the roots so that they will spread out and anchor your plant. This is done by cutting, scratching or loosening the soil within the root ball. With an annual that has smaller roots I just stick my finger in the center of the bottom of the root ball and pull them apart a bit. If some should break, it is not a big deal. Scarifying will encourage root growth.

ROOT BALL
A root ball can be described as the mass of roots and surrounding soil of a plant grown in a container or a plant that has been dug out of the ground.

DIS-BUDDING
This is when you remove some of the unopened flower buds to improve the size or quality of the remaining buds. I have done this on a Dahlia when I was looking for a larger bloom. I normally go for the quantity of blooms. Many times plants will put out many bloom buds, but these will open to be smaller as the plant is working to support them all. If you dis-bud, the plant will have a smaller number to develop and maintain. This makes the bloom much larger. The plant I dis-bud most is a Dinner-plate Dahlia. The blooms on this variety of Dahlia ended up being almost one foot across! 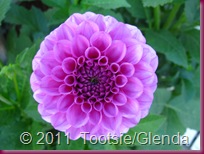 A double blooming flower is one with a large number of petals. I have used Dahlia as an example. 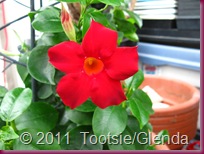 This is a flower that has only one single ring of four or five petals. A common example of this is Pansy. I have used a Mandevilla in the photo. 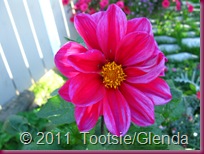 Flowers that have formed two or three rings of petals. I have used a Dahlia as an example. Dahlia also comes double flowered.

CROWN The crown is the part of the plant where the roots join the shoots. this is usually at soil level or just a little below.

DAMPING OFF This is a disease that affects the life of your plant. It is a fungal disease that causes seedlings to rot at soil level, fall over and eventually die. I have seen this happen to young Geraniums. This disease can be controlled by using an anti-fungal and avoiding over watering and increasing the amount of air flow between plants.

DORMANT PERIOD
This term refers to the period of time that the plant "sleeps." This is usually in the winter months and means that the plant is not growing. It has gone dormant during these unfavorable conditions, and therefore does not need to be fertilized and will require less water, if any at all.

PERENNIAL Perennials live much longer than annuals. These are the plants that you will need to check for hardiness. Perennials live several years or more. They will die off on top for the "off" or dormant season, but will come back to life the following year when the conditions are more favorable.

DIRECT SOWING Planting the seeds directly into the is direct sowing. Some plants such as Sweet Pea or Lavatera and Morning Glory do not transplant well, therefore are better suited to direct sowing.

HYBRID A hybrid plant is one that has been cross- bred to produce the features of two separate plants. If you should decide to take the seeds from a hybrid plant, chances are that you will not get the same color blooms as from the plant you took them from. Instead you will get the features of one of the parent plants that were used to make the hybrid.

INVASIVE Invasive plants are those that spread aggressively from their original planting location. They are plants that are able to choke out other plants that existed prior to planting, and can easily take over an area. 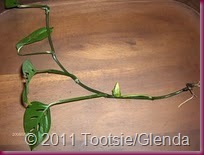 The node of a plant is the area on the stem where a new leaf or shoot grows. This is the area for pruning. When you take a cutting off of the plant, remove the leaves at the node and place in water. The node is where the new roots will form. Always take cuttings or prune above a node. 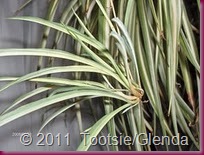 An offset is the young plants that sprout naturally around the base of the existing "mother" plant. These plantlets are often called suckers. Lilacs and many other shrubs are known for this. Spider plants also produce offsets.

SELF SEEDING This is when a plant reproduced by seed without human help. The newly seeded plants are often referred to as volunteer. A very well known self seeder is the Dandelion. 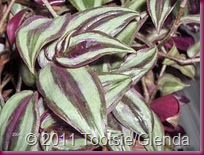 This term is used to describe the leaves on a plant that have more than one color. This can occur in patches, stripes or different colored edges. The example is of a Wandering Jew.

PLANTLET A plantlet is a baby plant that is formed from seeds or offshoots. They simply are young plants that have not matured yet. 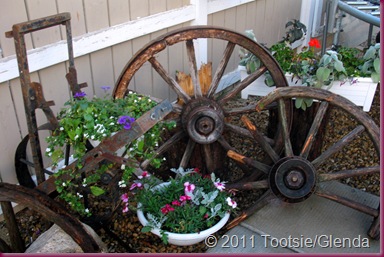 If I have missed any terms that you have interest in an explanation of, or if you are unclear in my definitions, please let me know. I will edit them into the post here. I have only listed the ones that I use most often and have heard frequently.

Sweety, I loved today. I love to plant things even ,before it is time to plant. I loose some , but just the idea of planting makes me think of Spring.You are the true gardener,I just play at it. But , ant it fun!!Kathy

toots, your blog just keep getting better and better! I love the garden ones of course. I knew all the terms, but how I would have loved to have know you when I was a new gardener. You are truely a kind , giving spirit. love you girl! vickydarnell

Tootsie, I'm so glad that you did this. I didn't know some of these terms. I love the fact that I learn so much from you! We're looking like rain today so I don't think I'll be outside working much but your blog always makes me want to go get my hands dirty and grow something! Cindy

This is just wonderful, you may not believe this but just YESTERDAY i googled the term Dead Heading!! Again a wonderful blog.

Good morning Tootsie! Great idea for a discussion. How are your flowers doing? Still working on my large circle at the end of the walk way, hauling dirt in, now where did all of it go over the years?? lol Posted some pictures on RMS if you get a chance.

Tootsie, Great Posting! I think you made it very easy for the new gardner to understand. My roses are very close to blooming!! My container plants are really filling in. I am so excited. How are yours?? Have a great night!!
Hugs, Terrie

I love that you posted this info. Some I knew and others I didn't. Great post sweetie :)

You have a beautiful family!

LOL! What a pair we would've made that day, had we gone out together, you with one eye done and me with lipstick all around my mouth! LMAO!!!

Congrats to you on Gollums Blog once again. I'm finally getting here after day 2 of helping with the upcoming wedding. It's been a rough couple of days and long ones. But I had to check out one of my all time favortie blogs and I'm so glad I did. Many of these terms I'm familiar with, but a person never gets enought reminders to they. Your new posts are absoluteyl beautiful, I expected nothing less from the Garden Queen. Hope all is well with you and yours. Hugs to you dear heart. Lynne

LOL!!! at you with one eye done!
Thanks for the glossary. Question, when you get a chance... could you please let me know if you know of any pretty annuals that don't need a lot of water? I bought some petunias because I think impatiens need a lot. Was I wrong? I don't know anything!!

Oh, thank you, thank you, thank you!!!! I searched "dead heading" to death, but I couldn't find anything more than "removing spent flowers". Your detailed explanation was so awesome! Geranium's were what was really confusing me. Last year I had some with these dead, brown stems poking out because I just took off the top bloom. lol..(I did remove the stems eventually.) All of the other terms were very helpful too, thanks for taking the time.
The other day I found some pots in my neighbors trash, just plastic, but who cares. So I went off to get more plants, it's like an addiction. Those pictures you posted are so pretty too, now there's more plants that I want!!! Got to get a house! lol
thanks again
Renee

Thank you so much for the explanations tootsie! They are very helpful to a brown thumber like me! Now that I know what dead heading IS I'll be sure to dead head this year.......yes I really am that clueless *sighs* Vanna

Hi tootsie, let me first say I love your blog! what a beautiful garden and home you have. I have a question for you. The buzz around RMS is that your the resident expert on gardening so I thought I'd pop on over to your blog and see if I might ask you a question? I heard that there is a flowr that actually repels mosquitos? ( not a citronella plant), but some kind of flower. Any idea what it is? Thanks!
Cathy
ctatcat2 on RMS