A while back I went junkin’ and acquired this little piece of gold!   This old wash stand has been standing in the elements for years just rotting away forgotten and was actually slated to be buried in a garbage pit!  The owner of it had no use for it, and it was considered to be in such a bad state of disrepair that it was garbage!

I will admit that it was in a bad state when I brought it home…I cleaned her up a lot for the photos…it was disgusting! Those three drawers…were full of mouse nest and other mouse by products….I am not even going to show the photos of that…it is not a pretty sight…trust me. 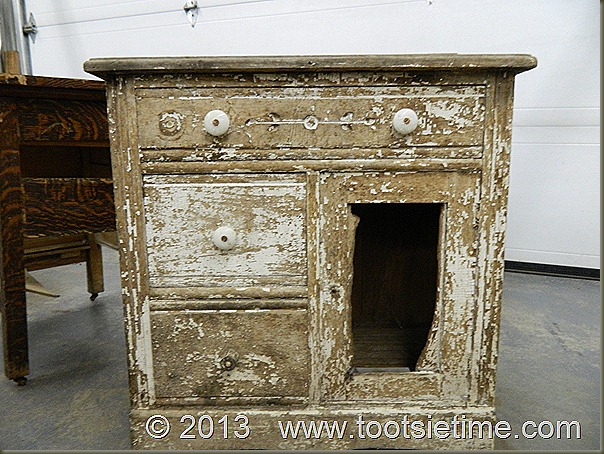 The door is broken…but I can work with that…there are a couple of handles missing…which isn’t a huge issue…and it smells really bad!

That is also something I have no problem taking care of!  This little old wash stand has potential~! 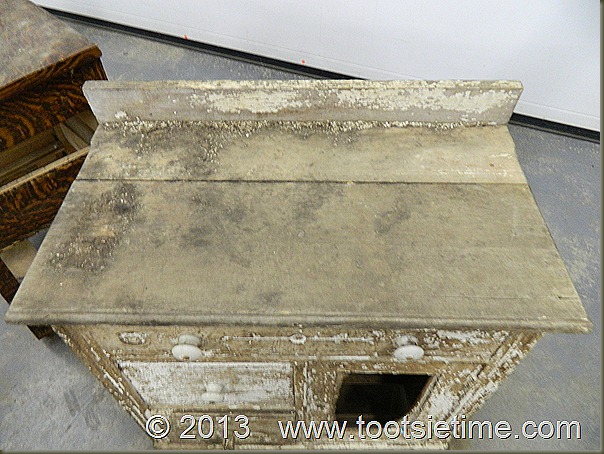 Over all it is a solid little piece…so what’s not to love??? 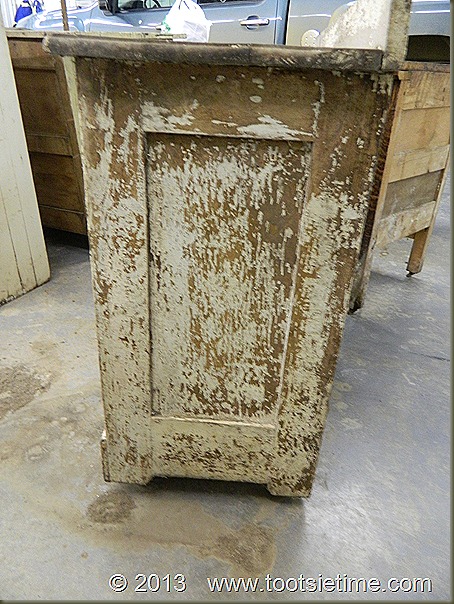 A little grime never stopped me before right???

While it dried…I set my mind to the task of deciding exactly what I was going to do to this little old wash stand and where I was going to put it when I was finished with it.

I decided that no matter what I ended up having to do to it to fix it up a bit…I was going to put it in the hallway just outside the bathroom on the main floor. 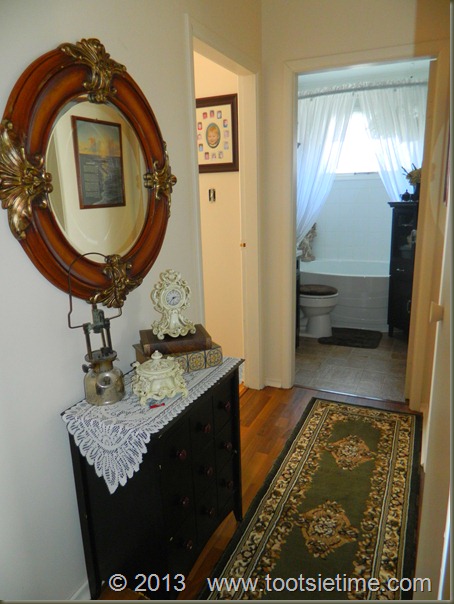 Right now there is a little table/cabinet type thing sitting in the position where I plan to put the new/old washstand…so I need to move a few things around to make room!

Once the little wash stand was dry, I was happy to see that I liked the way it looked just as she was! 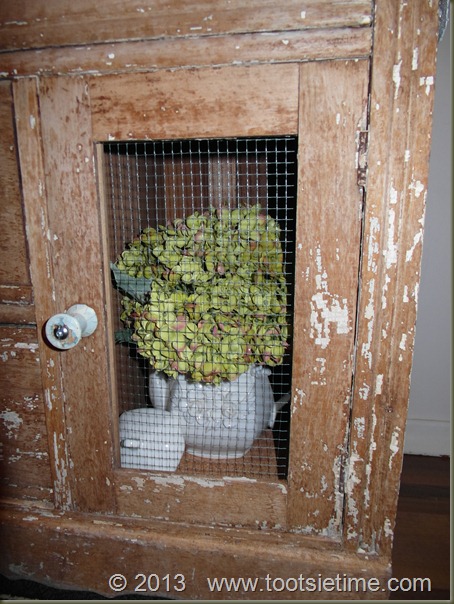 All I really needed to do to it was add a little chicken wire to the door, and find a couple of knobs to replace the missing ones!

I thought I had knobs the same as the ones that are on there already, but I don’t, and in a small town there are not a lot of options for shopping for drawer pulls…so I am going to have to make due with a little creative mending today… 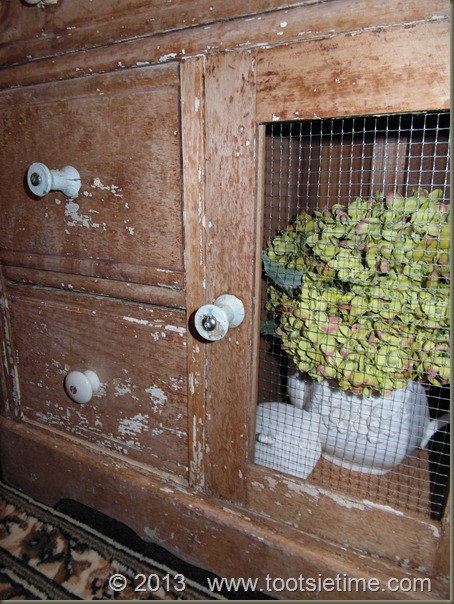 …I found two of the old wooden spools I pulled off another project and they fit in just nicely for now…a few staples later…and the door is now finished too!   I think I like it open rather than paned in solid with a piece of wood. 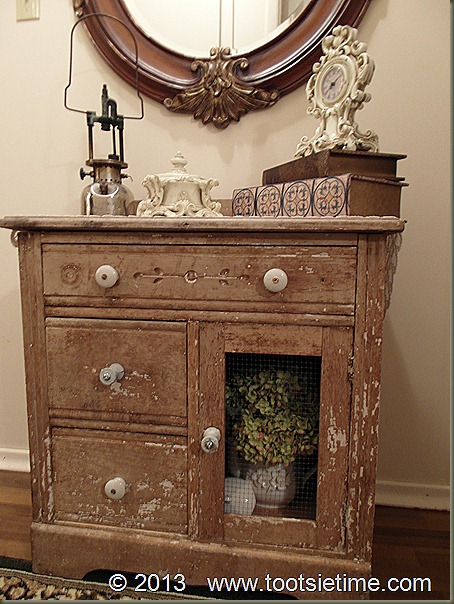 My antique wash stand is now sitting in her new spot in the hallway!   I love it!  I am not sure that I am loving  that mirror with it, and might have to change it out for something else… but for now it will fill the bill until I come up with a better idea. 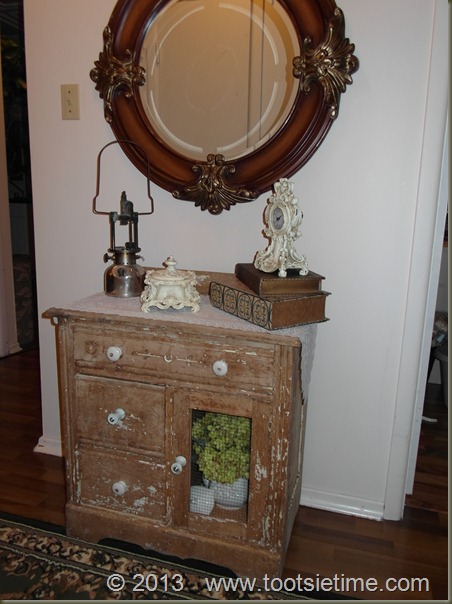 As for the other cabinet/table thing….I have a plan for that…and even a new home…but that….is another post for another day!   Stay tuned…that make over is almost finished…and the reveal is going to be fun!

*)*)*) if you live a life of integrity, many things may keep you up at night but your conscience won't be one of them.

What a rescue!!! I love, love, love it!!! I agree...it looks great just the way it is... You are really getting creative these days...Not only are you great a planting beauties outside... you are planting some beauties inside too. Blessings!

great job! I love it too..I think you were right to leave it as is! take care, maryann

Congratulations on your find...great stuff and lots of work, but a great piece of history...like you say though, I think the mirror isn't the correct one to go with this wash stand...happy hunting for a different mirror...

Rescued pieces are so special. I love what you did with this washstand.

If only I could see inside your mind to see such potential!!! Awesome!!!!

Another Glenda magic creation. I love the idea of the wire to replace the door. It is so pretty !