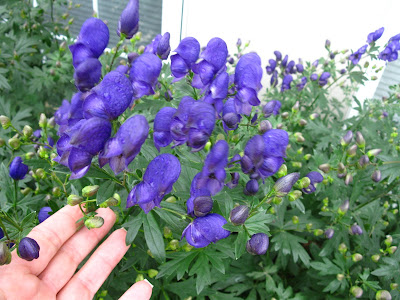 Confessions of a Plate Addict said...

Hi Tootsie! First, I am so glad to hear that your dad is doing better! And I have to add that I love the new kitty assistant! lol I have never heard of Monkshood. It is very pretty! Hmmm...I will have to think carefully about adding it since my staff chews on green things the second they hit the yard! But...I do have lantana and didn't know it was also dangerous! Time for doing some googling! Thanks! Happy week!...hugs...Debbie

I don't think I have ever seen that plant in our regular greenhouses. I could ask. I don't hardly have enough room for any more plants, but I do like that.
qMM

I love that pretty Monkshood. Thanks for showing me part of your lovely garden.
Take care,
Nannette

I have never heard of this plant. Thanks for sharing this. By the way, I love what you say in your heading. I need to learn to do more dancing in the rain. Thanks for the reminder. Do you mind if I use that in my sidebar as a reminder to myself?

Tootsie thank you for the information on this great plant for moi!! Poisonous or not I am going to try and grow it next year! I cannot get over the gorgeous vivid blue!! Simply beautiful!!!

How is your dad doing these past few days?

Hi hon, I love the color of this one. I know about pets eating things. I had one of mine sick last week. LOL Kathy

Hi Tootsie! Wow-flashy color-I like it! I've always wanted to try Monkshood, but because its' sooo pretty, I thought it might be difficult. I'm going to give it a shot, though, next year. It will go with the new roof!--LOL

Do you think it's too hot here for it? I would love to have some...beautiful! I'll have to see if I can find some seeds.

Morning Tootsie, I have never seen Monkshood or if I did, I didn't know what it was. It is beautiful, but I doubt it would grow in our Texas heat. A lot of my plants are dying, but I can come to your house and enjoy yours.

Hmmm...I do love blue plants but both doggies like to chew around the gardens. Maybe I'll have to take a pass on this one and enjoy it at your blog and other gardens.

No, not to my garden. I wouldn't want little children or dogs to get sick, but perhaps it'd grow nicely in a pot on the patio. What do you think? Thanks for sharing your blues. Happy Blue Monday.

Hi, Tootsie..my, what beautiful flowers you grow. These are so pretty.
I've been gone awhile and didn't realize your daddy is ill. I hope he is so much better by now.
hugs, bj

What a beautiful plant. But I'm sure yours is about 5 times bigger than the normal size! hehehe I didn't realize Heliotrope was poisonous either.
Great choice for Blue Monday.

Tootsie, I don't believe I've ever seen this plant. I love the vivid color. What a show stopper it is.. Thanks for all the info..hope to look for some in our area come spring..hugs ~lynne~

It looks like another wonderful flower to add to my ever growing list. I love the blue flowers of it.

Never heard of this plant Tootsie, but I love the color and this one is beautiful. Kids, back in school yet?

Your monkshood is just beautiful, but what I really loved is the information you gave us regarding the plant. I'm glad to hear your dog recovered from her snack attack. I hope you are having a wonderful day.

The monkshood is lovely. It's a new plant to me. I'll have to see if I can find it locally. Thanks for sharing this lovely Blue Monday post! Hope to see you at
my place for a Blue Rooster Monday. ~ Hyacinth

Beautiful flower Tootsie... Too bad it is so deadly but a lot of plants and flowers are... Good to know! Have a wonderful day. ☺

What a deep gorgeous color. I think I'll try growing some myself. You are so smart and so kind to help all of us with our gardens.
Happy Twirls

Something to add to my 2010 wishlist. I love that blue color. I am in zone 4, so this will be a fun addition. Thanks

Absolutely lovely. I can see you have quite a green thumb!

It is a pretty blue!! I've never tried it.

This is just gorgeous. What a beautiful blue. I hope you will join me at diningwithdebbie.blogspot.com for Crock Pot Wednesday. Mr. Linky will be up on Tuesday for your link. Thanks for posting.

Hello tootsie, your garden is so beautiful. I can see you are very knowledgeable too. Thank you for all the info about your beautiful blue flowers today.

I have always thought that was a pretty plant but never had one. I am giving up on my garden, seriously, not joking this time.

Just going to give my plans away and put in grass there. I'll plant a few in containers but I am done.

My allergies just don't make weeding and being out there worth it to me anymore!

Feeling you on the so many ideas and not enough time to do them!

Your garden is fabulous! I absolutely love all the colors. Thanks for the lesson on your Monkshood. It really must be hardy! Thanks for sharing.

I love Aconitum, but it is probably one of the most deadly of plants just like the Datura. My favourite plants are some of the the most deadly? hmm. In Ontario also grew Baptisia and really loved it. Have you had any luck with it?

Hi Tootsie! I actually have Monkshood growing in my garden. It is surviving despite the area where it is has turned into quite the shade-y spot. I have it planted next to the turtleheads. For some reason they seem to like each other. Go figure. ~ Robyn

Sorry I hadn't known about your Dad but glad to hear he is doing better.

I have Monkshood in my garden and this was it's best year although nowhere near as big as yours. I wish I would've known to cut it back, I'll have to remember next year.

Ok Toots if Len won't eat his mushrooms I'll start feeding him flowers ha ha!! Just kidding I think...Loved seeing this beautiful blue...How have you been dear daughter of mine...Hope you had a great weekend...Hugs and smiles Gl♥ria

Gorgeous!
I have a small marine heliotrope I bought weeks ago and all the bottom leaves have turned brown and are dead. Is it too much water maybe?