Hey all!!! Hope you had a great May Long Weekend! I know the kids and I sure did…we were busy busy busy…having all the fun we could think up…I even managed to deliver a little drama…by cutting the tip of my middle finger off…lol…but the weekend is over and I promised you a project…and I am about to deliver!
I acquired an old television cabinet a while ago, and it was in need of some special Tootsie attention. I stared at it every time I drove into my garage for about two months, trying to come up with an idea for it.
Then one day about two weeks it hit me! So…as usual, I did what I do…and I pushed the limits of the clock a few times, and I managed to make a cabinet that looked to be worthless…into something that looks rich and wonderful!
Unfortunately, somewhere along the line, the before photos that I was sure I took have managed to disappear, so all I have are the after photos. You will need to take my word that it was a scratched up mess and was in a cheap cherry color.
NOT ANYMORE!!!! 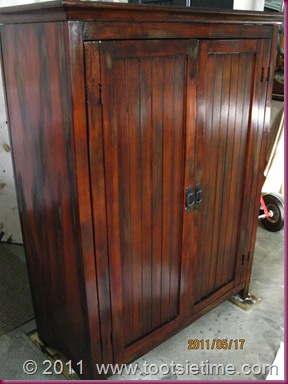 It is now sporting a brand new coat and accents!
If you look closely, you will see some very dark parts…that is where the most damage was. I sanded just the scratched parts down to the bare wood…then sanded the entire thing just a little. I then ran over it with a mahogany stain, and then almost immediately rubbed over that with a black high gloss oil based paint.
I love the finished look! 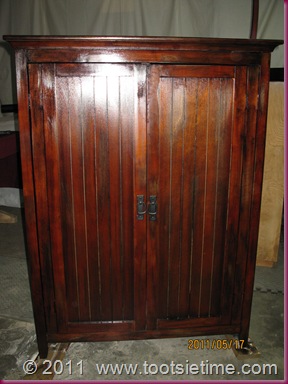 I am quite happy with the finished product. 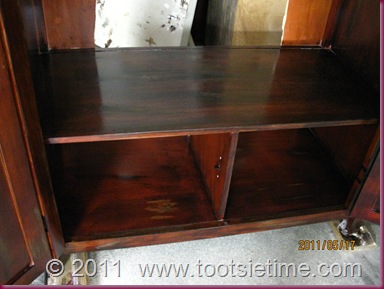 As seems to be the theme for me, the back was in bad shape. Someone had done a terrible job cutting out the space for cords and old style television bodies…it was gross!
I HAD to come up with something to make this ugly mess disappear. Then I got an idea…why not pleat and staple fabric to the back so that you can’t see the open space? I did just that… 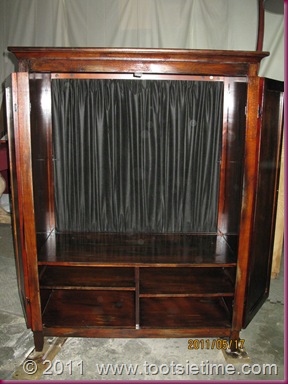 Those two doors have not one but two sets of hinges…the doors open and bend around the sides so that you can put a large screen inside if you want to. 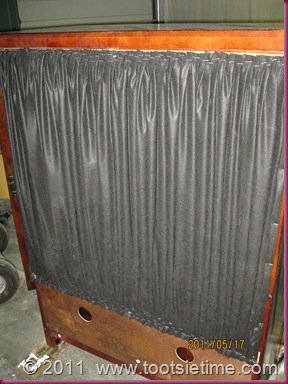 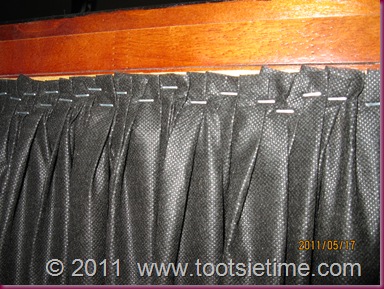 I stapled the fabric to two old survey stakes and then attached it to the cabinet with a couple of screws…it not only fixes it aesthetically, but it added a little stability to the cabinet itself! You can still pull cords through it…but they disappear, and there is no visible hole in the back! It almost lends itself to a feeling of theatre curtains! 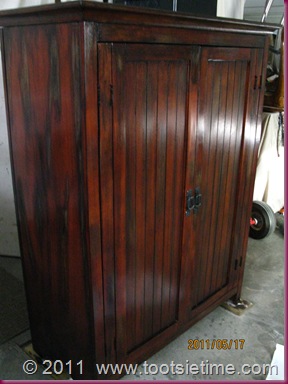 I had planned to put it in a garage sale somewhere down the line, but it didn’t even make it past the wow…look at the great photos stage…it found a new home with the very first person who saw it. A friend stopped by to visit, fell in love with it, and snagged it that very day!  Unfortunately, that "friend" didn't have any intention on keeping my creation for himself...he instead sold it and used the money for a party night he wanted to attend.   It is sad...but true.   If only I hadn't given this to him!
There you have it! My latest and one of my favorite make-overs. I wish on wishes that I could locate the before photos that I took…the change is amazing!
Until Next time…happy decorating!
*)*)*)...you know who you are!!!
(¯`v´¯)
`*.¸.*´Glenda/Tootsie
¸.•´¸.•*¨) ¸.•*¨)
(¸.•´ (¸.•´ .•´ ¸¸.•¨¯`•.
www.tootsietime.com

links to the following parties can be found in the menu bar above.
Posted by Tootsie at 12:00 AM

Email ThisBlogThis!Share to TwitterShare to FacebookShare to Pinterest
Labels: How to posts., Interior decorating, Thriftin and Junkin

You have done a fabulous job on this piece. It really does look great and I bet its' new owner is pleased as punch with it.

Hope that finger is recovering well!!

What a great cabinet! I just love that stain. Was it dry when you added the paint? It's beautiful. My gosh, you have talent just OOZING out , don't you! I'm very jealous of all your creativity, but glad you share your talents with all of us!

This looks great Tootsie! I love the black patina on the mahogony.

I love the stain and finish. Nice work!!! :D

It has been fantastically Tootsified!

You are most talented.

A Garden of Threads said...

You did a great job. It looks fantastic.

What talent you have. It turned out beautifully. hugs ~lynne~

I am not surprised the finished gem was snapped up.

I am in love with your colorful garden in your header. Cabinet is nice too...lol Check out my gardens if you get a chance. Sherron

WOW!! girl another great Tootsie re-do..I hope your finger is better my sweet friend..don't tell me it was the middle finger ha ha!! Girl I hope you sold that piece and not give it away like you do all of your things..Hugs and smiles Gloria aka Calif.Mama

I sure woulda snatched it up too - just gorgeous!! How do you determine what to charge when you do remakes & transform these trash to treasure goodies?

Tootsie, you have done it again! Beautiful.......hope your friend enjoys it!! XXOO

Gorgeous... would you like to come do the cabinets at our condo??? lol I am a new follower from catch a wave. I would love for you to follow back :)

That looks really nice. I love old furniture but not enough to refinish it. I like it when other folks do though! Following from the Catch a Wave Wednesday hop.

You did a WONDERFUL job on that cabinet!
I’m a new follower, and I have a page on my site that lists more than 200 hops, memes, and photo challenges… some for each day of the week. Check under the header for the link to that page. I’ve also just started a BlogFrog community that focuses on hops, carnivals, memes, and photo challenges. Go to http://theblogfrog.com/1504201 to visit & participate.
I hope you’ll visit me soon and follow back!
NCSue

Hi, I just came from Catch A Wave Wednesday and am a new follower. Congratulations on being featured this week.

Please stop by and visit when you have a chance.

Have a great weekend!
http://kidswonderart.blogspot.com

Thanks so much for dropping by the Be-Bop-A Blog Hop! I'm a follower and I hope you'll stop by again soon! Have a great day! :)

Hi lovely lady. Oh girl another great job this is gorgeous !!! I love the stain Beautiful. I hope you and your family have a Great Day !!! Also thanks so much for your comments on my new Tablescape so sweet of you.
XXOO
Diane

Wow! You did a great job on that. I love the red mahogany finish, it's beautiful. Now following.

Hello there, new follower here. I hope you'll check out my blog when you get a chance, and follow back.

Super job! And, oh, to have a flower garden like your header.... I am your latest follower on twitter and google.

Nice make-over! Hi! Thanks for hosting this blog hop. Following you. Would love a follow back: http://blog.writerslairbooks.com. Currently we have a posting prize for bloggers. Come check it out!

Beautiful job! I have several pieces I need to do....
Newest follower from the I Love Blogging Hop.

It looks great. Wonderful idea for the back.
Ann

OMG!!! It's fab!! I can't believe how good the landscape fabric looks. Awesome makeover!! You're the most creative person around!
*hugs*deb