Recently, I was a lucky girl, a group of my friends from the city I just moved away from, came to my house for a little visit! It was a nice visit over lunch and afterwards a tour of my garden and greenhouse…especially the greenhouse. Lucky for me it was clean in there! ha ha! 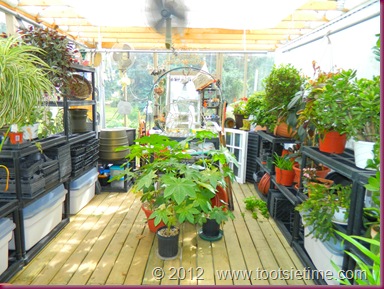 I was happy that they came because I really miss all of my friends that I had to leave behind, and I always welcome visits, but even better for me was that they took home several plants! You see, I have this little habit of pruning and trimming my houseplants, and not being able to resist rooting the cuttings. Because of this habit, I have WAY too many of each plant growing in the greenhouse right now. Turns out that one of the guests this day, is a girl after my own heart…Yep…she is a plant fiend too…and she was happy to take home quite a few…BUT even more importantly… I was happy to have some room for more plants in the greenhouse…so it worked out well and was a win –win situation for both of us! By the time they drove away their holiday trailer looking like a traveling jungle! er…ummm…I mean Heaven…ya .. heaven…that’s it!

I was laughing when she started to scope out the dynamics of the greenhouse…I think I saw some fear in her hubby’s eyes at that point too…She really would love to have one of her own to play in. (hint hint to you know who

Never in my wildest dreams did I imagine what my friend would do to say thank you to me for giving her all of those plants! She gave me a garden ornament! 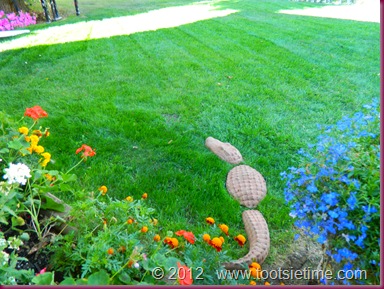 …odile! Yep…she had a cement crocodile made for me! Isn’t he awesome? He has affectionately been nic- named “Scruff.” *) 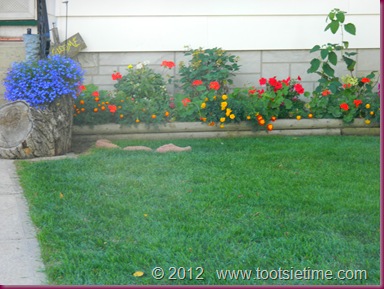 There he is from the sidewalk on the street. He has caused a LOT of conversation on my street since he arrived. Everyone is very curious, and they all love him once they see him. 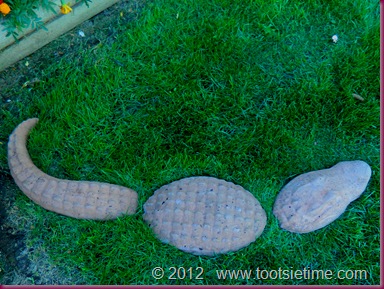 He came in three fabulous pieces: 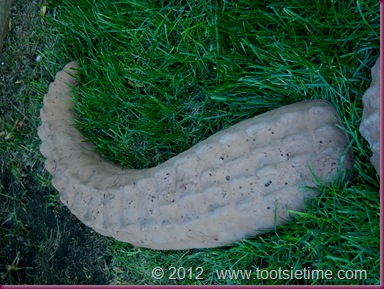 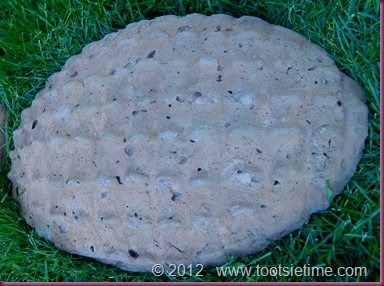 The belly…which is also reinforced. 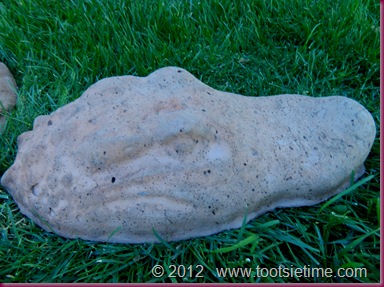 The head. It is detailed and reinforced as well. There was a suggestion made that I could paint the eyes so that they glow in the dark…but I think I will just let that be…I don’t need any glow in the dark eyes scaring the hell out of me in the night…(I would probably forget that I did it, and scare the crap out of myself one night…ha ha…yep…those who know me well…know that I absolutely would…) I like my Croc just the way he is! 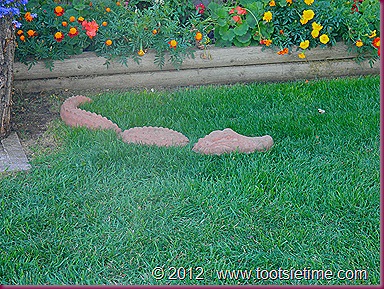 He looks like he is “swimming” in the grass! 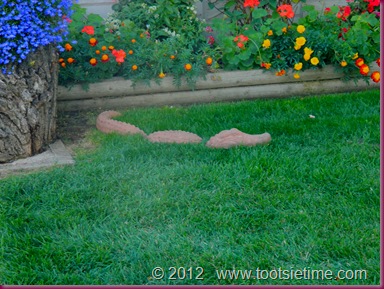 In total this croc ( A.K.A. Scruff) is around three feet long…and I can position him any way I like. For now…I like him just fine up by the front steps. He will be less likely to go missing this close to the house too! ha ha! 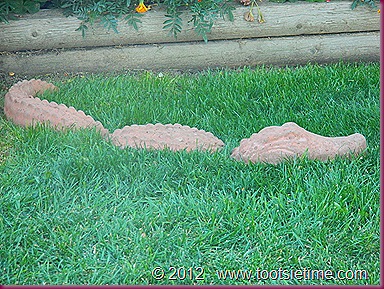 I might try to work him in around the fountain next year…or maybe I will build myself a pond and he can guard it! Who knows…I do know one thing for sure…Scruff will have a special place in my garden one way or another! 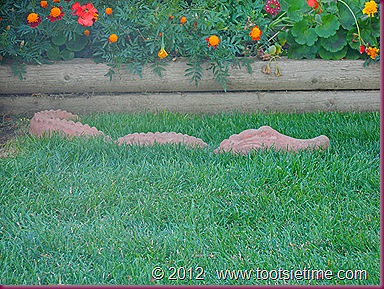 I don’t think I need to paint him… however, I might spray him with a sealant so that the concrete that he is made of doesn’t erode or degrade…but other than that…It will stay just as he was given to me.

Funny how I never would have purchased anything like this for myself…ever…but I absolutely LOVE it…especially because it was a gift. I have even found a spot to keep it in the greenhouse over the winter! (but that will have to be a surprise!)

I am so touched that she was so thoughtful as to think of me…Thank You so much Cindy, I really do love my croc…and will think of you guys and that visit every time I look at it! 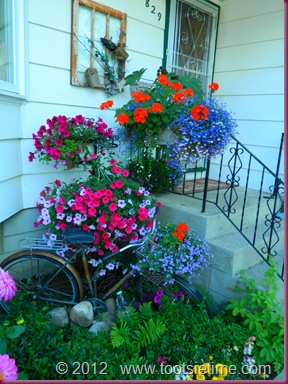 I betcha anything I am the only one in this tiny town with a croc like this one in the front yard! Hopefully it will scare away the huge (and very scary) salamander that was seen walking up the sidewalk one night a week or two ago. It crawled right into this flower bed! It was about 8 inches long! Just a little too big for my liking! I prefer my reptiles made of concrete!

Email ThisBlogThis!Share to TwitterShare to FacebookShare to Pinterest
Labels: Garden Art and Decor, Garden photos, Houseplants, Life At Our House

Wow, that was so sweet of your friend. She really knows you, and a croc will complete the garden design. It is now more attractive to humans, although not the butterflies. Like you, i also want my reptiles made of concrete, haha!

Who knew that crocodiles could survive so far North? I had no idea. I wonder if yours is the only crocodile in the wild in all of Canada? That's quite a neat present and indeed worthy of being the talk of the neighborhood.

What a neat croc Scruff is and he looks great there.

Have a wonderful week ~ FlowerLady

He is a great addition to the garden and I am sure he will scare the crap out of you on a regular basis. What a nice gift.

That does not look like a Canadian ornament at all. He is adorable, a little scary but adorable. I also thought he needed a light spray of paint and I mean light, a greenish gray...BUT in the grass he would blend in to much. I do however like the concrete color in the grass, the eyes would be cool painted, not glow in the dark though lol. Glad your friends visited you and Cindy was si thoughtful.

Wow! You have a really nice friend! I would Love to have a greenhouse...sigh...
Have a great day!

I love him! My mom lived on a Bayou in South Mississippi and she had a few of these in the water there. This looks just like a real one peeking out of the water! Have a great week! Carol

What a lovely gift to receive. And yes your croc is now the talk of the town.