Hey, I’m  back!   I know, I know…it took me a few weeks… and I am really not sharing in order of event…but I am at least getting a thing or two up and posted! lol

If I were to tell you all of what’s been going on here since November…you would be in shock…so saving a headache… let’s move on to the fun stuff!

A few months back, a friend and I were having a casual conversation about organizing and making more space in our homes.   She was talking about how her garage is LOADED with everything except vehicles.   It had become a warehouse for her business ventures and she just needed to get rid of stuff so that she could make her space a little more functional.

At one point she mentioned that she needed to get rid of a set of old lockers that once were used in her son’s bedroom but now were just sitting there…taking up valuable space in her garage…and no one wanted them anymore.

I know that you guys know that that is exactly what I was thinking!

I told her that I would be there whenever she wanted to rid herself of this item…I would LOVE to have them!

(and then I paced back and forth for days waiting to hear from her again…to say she was ready!)   (you know that I damned near wore out the floor waiting!!!   lol)

The day finally came (about three days later…but felt like WEEKS) and I was so excited!   I got that Cowboy into the truck, plugged in the radar detector (because there might have to be some speeding going on)  …and away we went!

We had a nice little visit…and then loaded up the GOLD!   It was time to hi-tale it home at the speed of light…and get to playin’!   My wonderful new project piece went straight into the greenhouse for me to peruse…and perhaps to play with.

And then the next day, something happened...I didn't have time...and...Over the next couple of months, a LOT of things happened…and we were very busy, so my super exciting project piece had to wait.

It was only after we moved to the acreage, that I had a day that I decided to just spend ‘playin’…and I pulled these out of the shed, and into my office to contemplate! 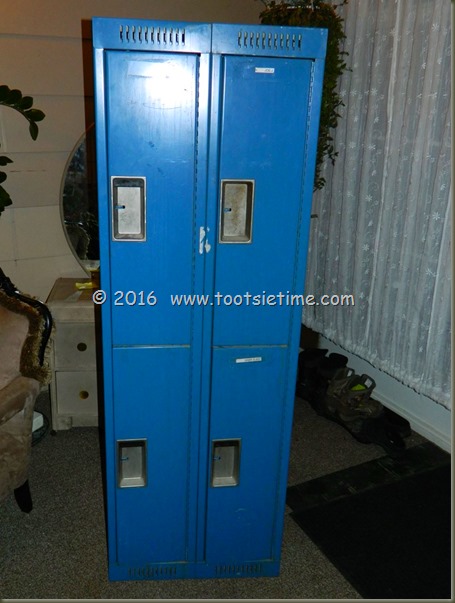 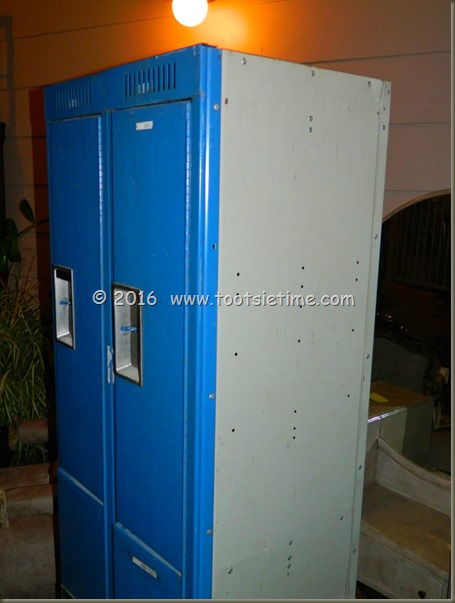 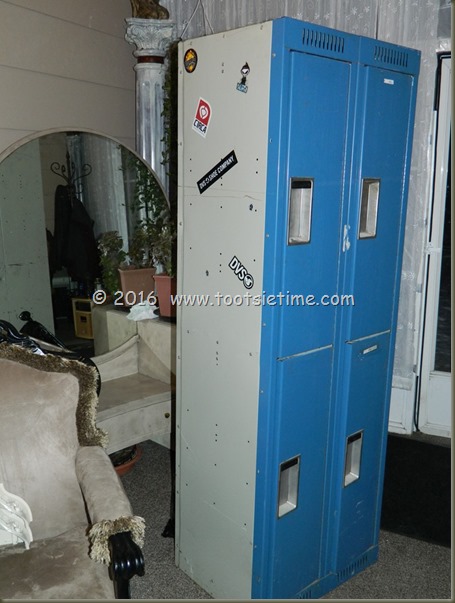 There is NO doubt, that this set was once in the possession of a teenage boy!   I  know those stickers…lol   Unfortunately, they must go! 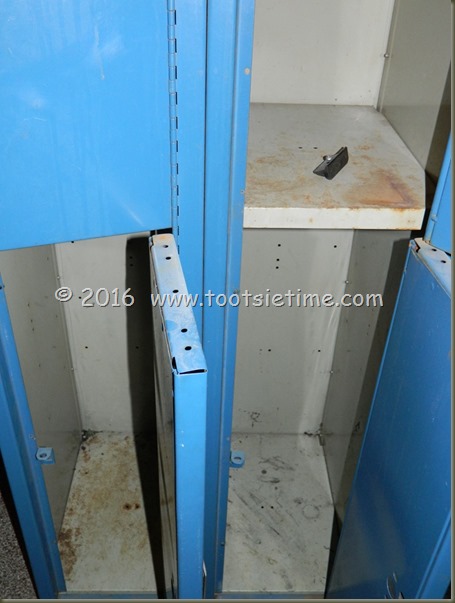 The inside needs a tiny bit of work too…nothing a little elbow grease and maybe some shelf liner can’t fix…
I got to work…and the result was exactly what I wanted it to be! I primed it out…and dry brushed it with several colors of paint to achieve the oxidized look I wanted.  (my photo does not do it justice!)  (I am RUSTY at this!)

I have another old locker in my garage that I thought would be the same dimensions…only a full length…that it would pair nicely with...but sadly…it is an army locker…and these are high school lockers…so they are not the same.   Oh Well…I still use them all!  lol

This treasure is waiting for the Cowboy to put a platform with wheels under it so that I can move it around at will…but for right now…I have placed it in my office/studio…and she holds bolts and bolts and bolts of lace…and other fancies for my business!

You sure can tell how rusty I am at taking photos and posting my stories…I am sure it will come back to me one of these days.  lol

I will share my studio/office and some of the others in our new home as soon as I get a chance to do so!   Right now my office is in full disaster mode…as there is a new line being created just in time for another big show coming up in April!

That’s all for today…I hope to see you all again in short order!  What have you been up to?   I hope to have time to get around and see ASAP!

Until Next Time…Happy Decorating and Creating!