hey all! I have had a lot of people ask me to re-post this...so here I go!

Hello!!! WELCOME!!! I am so glad you popped by today! Before we get this post going too far, I would like to warn you …this is going to be a LONG visit…so grab a coffee and a snack…get comfy and we will get started!

I’ll wait here till you are ready.

I was in the sunroom, installing sheets of styrofoam insulation to the ceiling to help ensure that my fireplace would keep it warm enough, when I got to looking at something. (for a look at how I made the fireplace…click here) Here…let me show you… 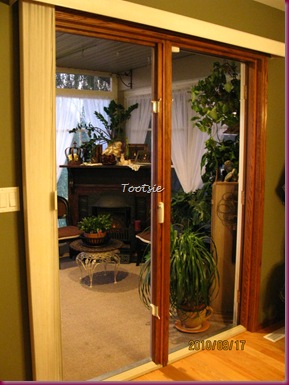 This is a photo of the ugliest part of the main floor of my house. I am referring to the door frame. This doorway used to be the outside door to my house. After having the deck transformed into a sunroom filled with glorious windows…(which currently need desperately to be cleaned) …I removed the french doors in an effort to create space and a feeling of unity. Well…it just looks unfinished and doesn’t fit with the rest of the house anymore. 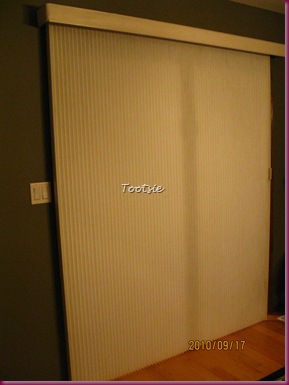 There is an ugly fabric blind that slides from one side to the other…and when pulled…reminds me of a teenager using a bed sheet to block out the sun…it HAS GOT TO GO!! (I never ever used it anyways) 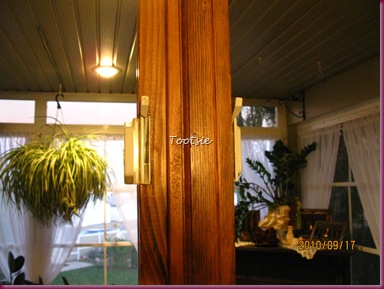 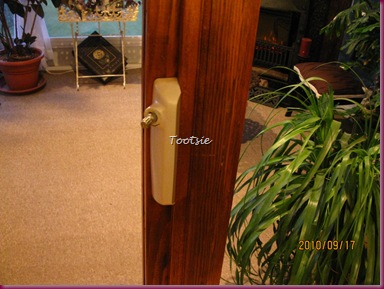 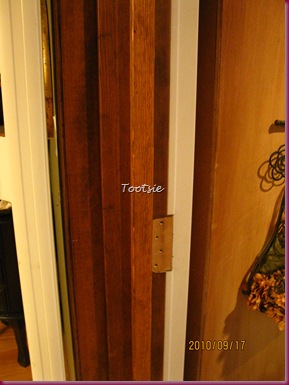 The scars from where the hinges were holding the doors up are there and are just as obvious as a zit on a pale kid’s face. SO…I HAD to do SOMETHING…but what? 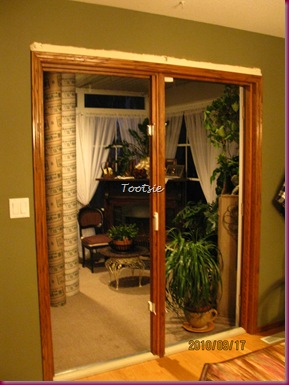 I have it!!!! I know what I am going to do!!! I started by removing the large blind and valence that came with it. 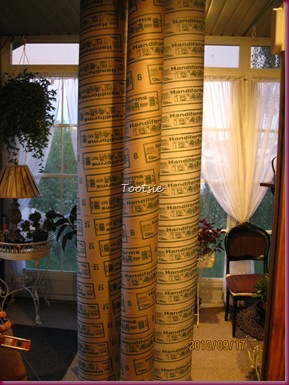 A quick trip to the hardware store rendered me some concrete forms… I had originally picked up 8” and 12 “ forms, but returned the 12” for two 10’s, as 12 inches was too much. I also picked up two pine fence boards, 6 brackets, two bags of foam draft stop piping, a roll of embossed wall paper, a 2x8’ sheet of 1” styrofoam insulation, 4 strips of plastic plexi glass edging, some glue and some rubber baseboard stuff (like you see in office buildings etc.) In total my project would cost me just under $80.00 and a little imagination fueled energy. 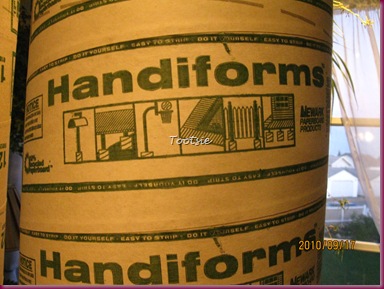 This is a closer look at the concrete forms. 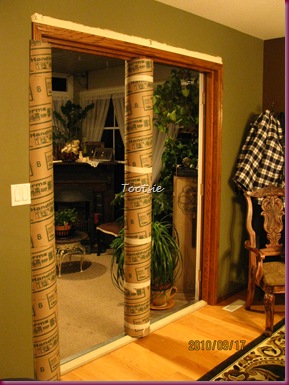 I quickly ran home to get started…I measured the height of the door frame on the inside…then cut directly down the length of each one to create an opening that I could fit around the door frame. On the center one, I just simply taped it closed to hold it in place, but the two side pieces were good to just be pulled open over the side frame. I then proceeded to wallpaper the forms, and cut squares of 1 pieces out of the styrofoam insulation sheet to go around the forms, glued the draft stop foam around the bottom to hide the spaces where it was imperfectly cut and to add some interest.

Next I installed the fence boards on each side of the top of the door frame with the brackets. This would give me something to glue the rest onto and would also offer me some display space in the end. (hey, a girl’s gotta accessorize!) 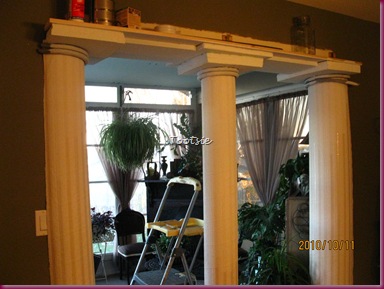 I cut squares out of the foam insulation sheets and notched out for the door frame’s working parts and uneven wood…cut out for the round of the forms, glued them up…filled a little with dry wall filler, and used a couple of screws to make sure all was nice and secure. Then…I primed…three coats of primer…to ensure that the latex paint I would use wouldn’t eat the styrofoam…and would stick nice and even. 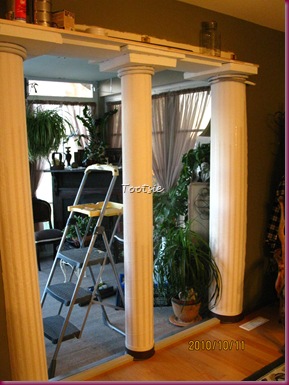 I then used the rubber baseboard stuff around the bottoms of the ‘pillars’ to finish that off for now..(one day soon the door stop part will be transformed as well…but for today I am doing just the tops and sides). This stuff was difficult to notch out…and the glue would not hold it in a small circle shape so I had to use a couple small screws for this part too. 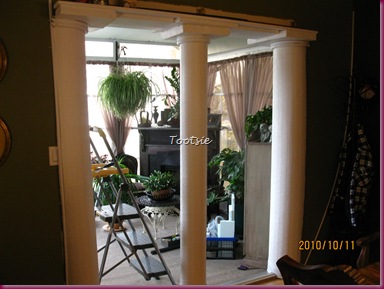 All the priming is done! I so wish I hadn’t gotten so excited…and had taken more of the step by step photos that I need to show you how I did this! It really is simple! 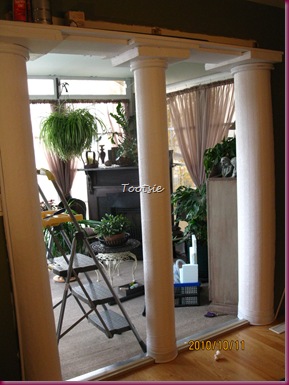 The glue held…the screws were barely visible anymore…and I decided NOT to sand or file the styrofoam anymore than I had to as I would like a little bit of a ‘ruins’ effect or a crumbling plaster look to some of it. (sometimes imperfect is the best way to go) 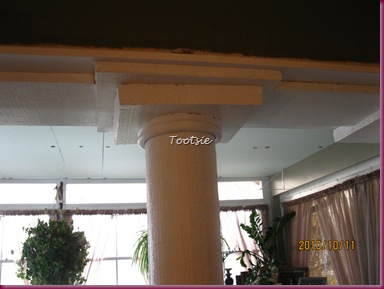 Here is a closer look at the before…or the during. The ceiling behind the pillar, is also done up in the styrofoam sheets…it still needs to be painted. It will help hold the heat in the sunroom during the winter months. It might be difficult to see the beginning and end of the framework, due to the ceiling in the sunroom…sorry! 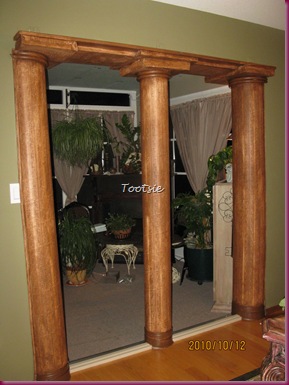 Next…I whipped out the paint that I used to do the walls in the living and dining rooms. It is called “heart of bronze”. I just put it on…pushed it into the cracks and dimples of the whole thing…and rubbed it off for a weathered look. I did not want a solid color on these…I wanted them to blend with the house, yet stand out just enough…ya know??? I know …you know! :) 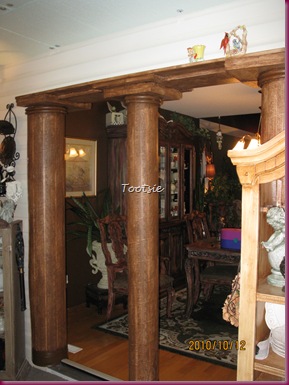 TA-DA!!! I am waiting impatiently for the paint to dry…so I could install the 4 small pieces of plastic plexi edging that I needed to put along the sides of the end pillars…to finish them off. I just cut them to size, and glued them on. They gave a smooth finish to the sides that are butted up against the walls. 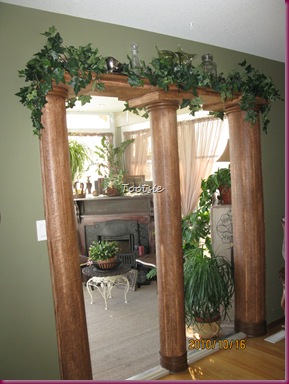 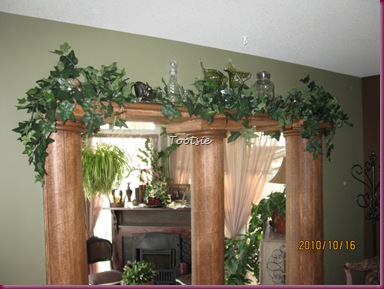 A few faux ivy’s and some ‘junk’ and we are cookin with gas!!! 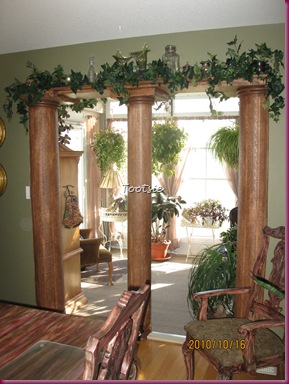 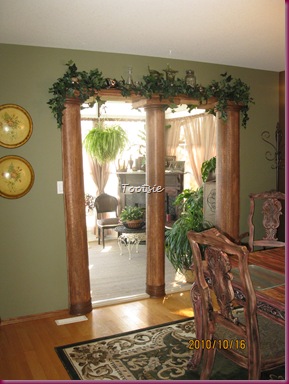 It looks much much better if you ask me! This is the view from the dining room and kitchen area. 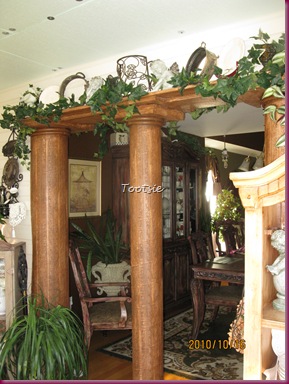 This is the view from inside the sunroom 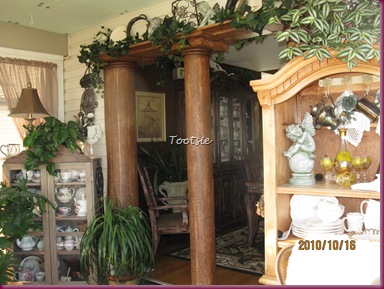 I do like this…much much better…and the best part is…I didn’t have to remove the old door frame or any of the mechanics of it. It is all still there so that if I ever decide I want to have the french doors back on…all I have to do is go out to the garage and get them…take down the pillars and put them back on! 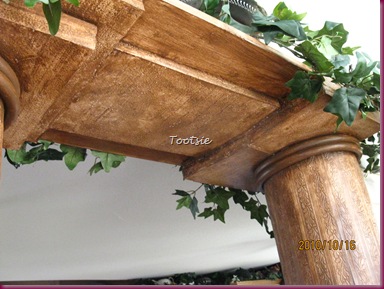 This is the underside of the doorframe that I put the styrofoam on…I did different levels to add some interest. 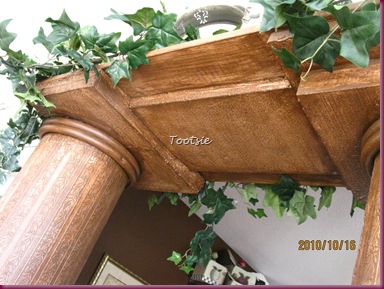 I am quite happy with the overall look… 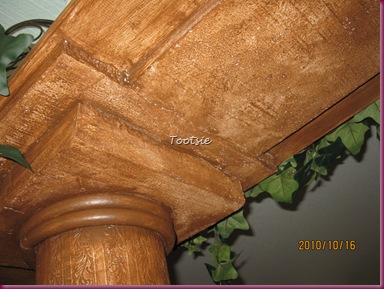 It is hard to tell that it is all just a mish- mash of different foam pieces all glued, and painted to make one piece. 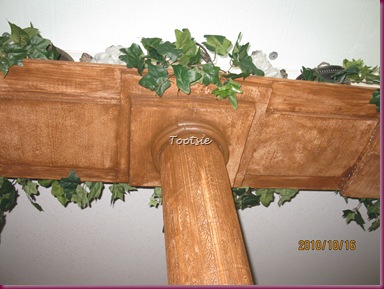 And that is all I have to show! I love it…what do you think? Would you ever try something like this? If I were to have purchased actual columns in the hardware store…this project would have cost me upwards of about $900.00! I think for the cost…it looks damned good! Oh…and for those who keep asking where I get these ideas…They just happen!

I have linked this project to the following parties:

Well…that is all from me for today. I think it is enough don’t you? haha. Thanks for reading…and I hope you enjoyed your visit! I am off to paint the ceiling in the sunroom…I can’t stand the ugly greenish color of the styrofoam…my sunroom is going to be so warm now that I finished it properly. woo hoo!!! go me!

Until next time hugs and smiles to you all *)*)*) to my very special three winks… and to one wink in particular…(you know who you are) I feel bad about your attempt to ‘flaunt’ on Friday…I didn’t acknowledge it because I was stunned at how LARGE your flower has gotten…tsk tsk…(some things just don’t need fertilizer ‘cuz bigger is not always better) But thanks for the ‘boost’ and the giggles.

See you next time!